A Random Moment with Ijeoma Iheanacho

I answered her casting call that was posted on SocietyHAE. We've kept each other abreast on our shutterbuggery. Last spring, her series, "Faces of the Great Recession", was a featured in the Faces of the Economy show held at the Art for Change Gallery. I finally made it to the Bronx, where she was gracious enough to grant this interview.
~   ~  ~

My name is Ijeoma Iheanacho. I am a fine art photographer.

How long have you been doing photography?

So “fine art”, that’s your specialty?

Fine art to me, in photography, means shooting something that’s non-commercial. Beyond that, I don’t pretend that I have any airs on what I will and won’t shoot.

What is your ultimate goal with photography?

The reImagining is… featuring yourself [laughter], is basically the stories of 100 women of African descent. It’s allowing those women to tell the stories about the stereotypes that affect them every single day. I want them to be able to use my talent to show the world who they really are.


Are you a self-taught photographer?

A bit. When I was at school, I did take some independent studies but beyond that, I am self-taught. I did just complete a course at the ICP which was more for fun than anything but beyond that, no, I don’t have a degree in it or anything. 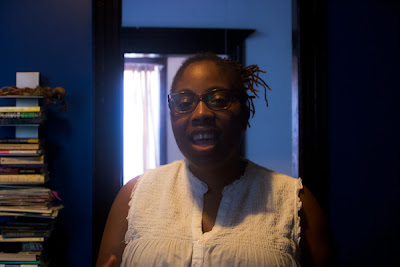 I overheard that you were once in the punk scene. What was it like being a Black woman in that scene?

Being in the scene was me being a fan. I wasn’t a musician or anything. There was even, for a time, where I set down my photography; I didn’t even get to shoot during that time. It was just the idea of seeking out a different lifestyle. I was fresh to New York… It was good. I was drawn to the music—to me music is huge, I’m a huge music fan, even though I can’t play any or anything—the scene was just the scene, me in my early 20’s…

Do you relate to Black feminism?

Oh, definitely. I love the idea of Black women being able to address their needs and their issues, even outside of feminism. Feminism means very different things to very different people. If you look at your traditional feminists, what happened, there actually had to be a Black feminist movement come out of that because a lot of our issues weren’t being addressed so I 100 percent feel as though even within my feminism there’s room for my Black feminism, the need for my Black feminism.

Is there any eroticism in your work?

Neither. Pentax. Yeah, baby. I’m serious. To me, Pentax has what both Canon and Nikon lack at a cheaper price. And the lenses are so much less expensive. The very first camera I used was a Pentax and ever since then I always just kept upgrading straight to Pentax.

Have you ever turned the camera on yourself? Do you shoot any self portraits?

That is hilarious. I do not do any self portraits. And they actually asked me that in my ICP class and at first I said no, I don’t do any self portraits then I said, actually yes, all my self portraits really are The reImagining—every single one of those stories—I’m literally telling my story through the stories of my subjects, every single time, everything I’ve worked on, the politics that are in my brain that I have my model go through, even though it’s not myself in the image, it’s what’s going on in my head, so yeah. 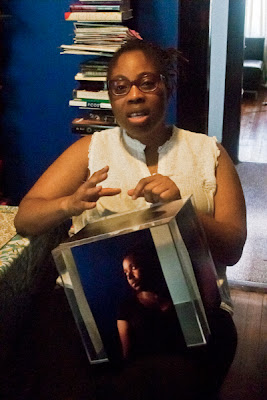 Tell me about any upcoming projects.

Well the project that I’m still working on the install for is called Manipulated Light and Power. The idea of that first moment you hit that stereotype, that stereotypical wall, the first time you realize that somebody’s stereotyping you, how do you work through that mentally, how does that affect who you are. The big antagonist for Ellison in The Invisible Man is light so I tried to use light to both define and hide who the model is. So basically [I] use light as stereotype, I went through the basic five elements of ascending and descending into the madness of being stereotyped. I’m still working on the installation of the piece. This is going to end up being a glowing light box. It’ll be slightly larger than this, I’m still working on the design for that, the box itself is going to glow, it’ll be a pulsing glow, so you get the idea of these images that were manipulated by light are being manipulated again. It’s that constant cycle of misrepresentation that Black women find themselves going through day in, day out, so this is what I like to call the prequel to ThereImagining. The reImagining is how these women come out of that cycle, how they break that cycle. 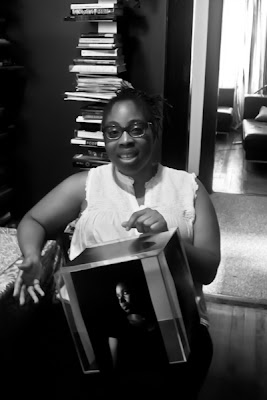 You’re a storyteller, and you like Sci-Fi. Let’s go to the year 3082, what do you want those future humans to learn from your images?

I want them to learn love. I want them to understand that people were striving to find their common selves; people were trying to knock down the barriers that separated us as human beings. That somebody was trying to say these people have a right to speak, they’re as valid as anybody else in our civilization, let’s listen to them, let’s address their issues.

If my muse were an animal, it would be…

Oh, just because I’m such a dork, it would be a Black African Panther.

I just love the power behind something that’s so subtle. Like you never see a panther working hard for its chase. It’s just always looks so graceful… there’s a lot of tamed wildness and femininity, like that tamed wildness in Black women, I tap into that when I feel appropriate and I set it down when I don’t so that’s definitely my animal muse, a black panther.