This one's for Berman Fenelus 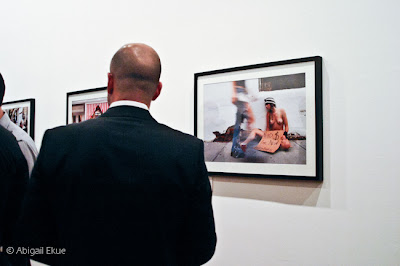 A few weeks ago my interest was piqued when I learned of the exhibit, Nue York: Self Portraits of a Bare Urban Citizen. I mentioned it my Raising My Hopes With Bob's Anuses post. Erica Simone took nude self-portraits of herself around NYC. I'm not going to be interested?


With all the press the opening was receiving, the event was very well attended. When I arrived the line to enter the Dash Gallery stretched all the way down Duane St. I almost kicked myself for not showing up at 6pm for the soft opening for press but the line was moving.


Kudos to security at the door. The RSVP list they had to weed through was pages long. It was alphabetical by first name. Easy entry for me.

Open bar was provided by Belvedere. I saw more of the brand than I did of her work for the first few minutes I was there--Belvedere glasses were stacked in all sorts of arrangements along the desk at the entry; the orange of screwdrivers, the reds and pinks of half-consumed vodka-crans and the greens of limes floating in vodka tonics. 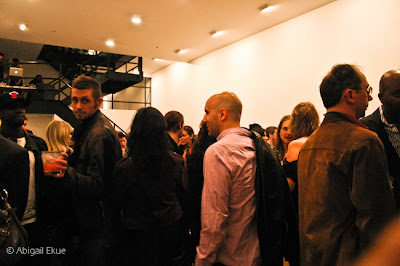 It's moments like these where my size comes in handy. I can make my way through a crowd with amazing stealth. We were packed in there like sardines and there was a lot of close-talking. I'm counting on my immune system to do it's job. I made my way towards the back of the gallery studying the photos along the near wall. I'd seen some of them online. What stood out that night was the price of the prints. Art is still a lucrative game if you can get your foot in the door.

Him: Are you going to continue this series?

The woman shook her head and was gone.


That exchange was the only clue I had that she was the artist. I saw her later on in the evening and tried to "place" her face but couldn't see that she was the same woman. Maybe it's because she'd lost about 10 pounds according to another guest I chatted with. The conversation began when he noticed I was carrying a camera. He told me in his saucy Latin accent he'd met Simone about 3 months ago at a pizza shop so when he read about the show in the paper he thought, "Hey, I know that girl, lemme go check it out." After, he went on to tell me that she'd lost weight because when he met her she was more...  As he struggled to find the words, I said, "Shapely," as I made the hourglass shape with my hands. He laughed and agreed. I told him I understood and that I was used to a more "shapely" woman as well. "Ah, I don't care about the photography. I like the curves! I'm Latin!"


Therein begins the tone of most of the conversations I had that night. More than one man asked my opinion--I like the concept of Nue York and wondered if nudity would become more of a norm, we discussed the nudes of Gary Breckheimer and they shared with me that the project "worked" because she's cute. Is that the only reason it "worked"?


Another patron said he'd prefer if she didn't have a tattoo. Physically, her body works because she has the "lines" but for art modeling, it's about the "purity" of the body and a tattoo can take away from that. One guy flat out said no one else would've gotten a show if they didn't look like Simone. Another man mentioned maybe it would've worked if it was someone on the other end of the "attractive spectrum" ie. obese and ugly. Yikes! You have until April 28th to check out Nue York at the Dash Gallery. 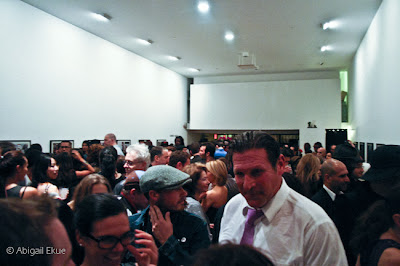 Erica Simone was "arrested" in one of her photos. The arresting officer in her photo is the tall gentleman in the foreground of this photo. He was a  mini celebrity for the evening. 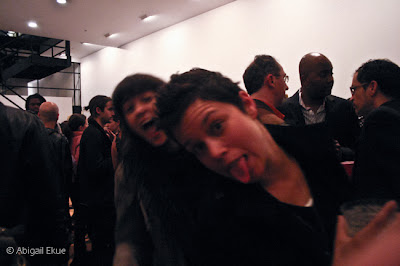 At the instant I hit the shutter, these two women walked by and hammed it up for their fifteen minutes. Here you go, ladies! Timing is everything. 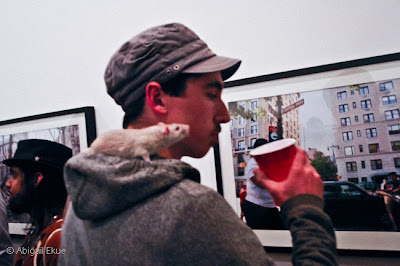 I noticed this man with his pet rat on his shoulder. I can handle rats in the subway. I've never been this close to one. And it was at eye-level. It couldn't jumped off his shoulders onto me and filed his sharp teeth on my eyeballs. I approached him and struck up a conversation about his little friend. Do you understand what that means? I got closer to the rat to talk to the man. "I take him on a walk everyday. I take him to the bank, to the store... I don't take him to the doctor," he laughed. First cats, now rats?


The evening didn't end without a bit of networking. Funny thing, I wasn't in that frame-of-mind, but it goes to show, you must always be prepared. "You should be on those walls," is what he said when we discussed my art in front and behind the lens. Just yesterday, I had another man express interest in my Emotional Black Male project. I already know how the opening for that exhibit will be executed. I struck up a conversation with a Greek neighbor from Astoria who asked a lot of questions about my work and if I had prints for sale. Near the end of the night, I took a spot near the back of the room, while taking a respite from shooting. I was approached by a young man who said he "saw me doing my thing" as he mimed a camera, and that I was "everywhere" that night. He liked that and asked if I had a card because he's looking  for a photographer to hire for a project. Enough-times-a-wasting is the moral of that story.