The Darker Side of Lust In Paris 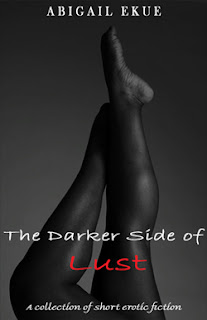 My art is holding a place for me in Paris.


Copies of my book, The Darker Side of Lust, are available at Shakespeare and Company in Paris, France! This was a moment of I wanted something, asked for it and received. I originally contacted the bookstore about hosting a book reading during my (then) planned trip to Paris last November. All their readings were full but they invited me to participate in the open mic they were starting at the time and told me I could drop off copies of my book for sale at their shop...

Believe it or not, there aren't references to Paris, no stories take place in Paris (or France) and there are no French characters in The Darker Side of Lust. After a fling with a French lover and a very worldly summer of 2010, I wrote Manu et le Connard to commemorate the 1-year anniversary of the release of my book. A few more formatting tweaks and the story will be available as a Kindle Single but for now it's available as an e-story. I have to experience Parisian lovers and fighters before I'd have to knowledge to pen a collection of stories (erotic or not) with authentic French flair. In Manu et le Connard, I used my imagination:

Morgan was very attracted to his lean figure. His jeans sat right at his waist and when he wore one of his ratty, too-short t-shirts she would catch a glimpse of his abs and the crest of his hips. There were never any underwear logos to spy. She couldn’t resist tracing his 32-inch waist with her fingertips at every opportunity. Morgan was thicker and softer. He poked and squeezed her body constantly. The view of her from behind made him smile as much as her face.
Manu’s nose was rounder than she’d first noticed, not very aquiline. His nose went unnoticed because so often she stared into his bright eyes detailed by the long eyelashes that waved at her on every blink. Morgan could see what she was thinking in his eyes. Manu had an olive complexion with red-orange undertones. He could pass for Italian or Sicilian, Spanish, Greek or Brazilian as well as his actual French nationality. There was no mistaking Morgan’s African heritage. When she informed people of her  half, that became apparent as well and the rhythm of her speech was all .
A few blocks ago they sat at a sidewalk café, sipped café and watched people go by. As they strolled along the rue, he continued his story about an octopus and a pineapple on his trip to St. Kitts in animated fashion. Morgan could barely put one foot in front of the other; doubled over in laughter, she walked in staccato steps. Manu was hilarious without even trying. Morgan reached for him to regain her balance. She wrapped her fingers around his upper arm. Through a sidelong glance she caught the slight raise of his eyebrow when she ran her finger in a circle against the skin on his inner arm. She loved discovering new erogenous zones on his body. Both being very erotic and sensual by nature, they’ve had frank discussions about their likes and dislikes and dares. Their sexual communication was constant, if silent at times. They’d have entire conversations in the light of day, the audience not even aware of what they were witnessing. Telling glances they shared were in their own secret language. The sexual charge was in the rhythm of their steps—Manu’s four-count with Morgan providing the golpe beats with her shorter stride.

As they walked past the Metro station, a vagabond called after them. Manu instantly saw red. The men approached each other spitting insults. Morgan’s gaze shot back and forth between both men. She didn’t catch everything they were saying, she only caught the bad words—fils de pute, baise toi—the first words she learned.
The vagabond made the gesture of self-pleasure while he spoke, “…la veuve poignet!”
“Nique ta mère!” Manu shot back. His dark eyebrows became a unibrow as they were driven together in anger. She still had a grip on Manu’s arm. His arm flexed in Morgan’s hand as he gestured wildly.
The vagabond spat at Manu’s feet. “Cocu de merde!”  He made a lewd gesture towards Morgan then grabbed his crotch.
“Ta gueule connard!”
Before Morgan could even blink, fists were flying. Few people got the chance to stop and watch the grappling men. As quickly as the fracas began it was over. Manu stood over the man and kicked him in the chest with a thud. Morgan watched the scene, her eyes wide. Manu put his arm around her shoulders and led her away. She could feel his heart racing through his armpit and his breathing was a little labored. His forehead glistened from the exertion. A man who had witnessed the match acknowledged Manu with a nod. Morgan peered over her shoulder at the vagabond as he lay on the ground in the fetal position clutching his gut under the dusk sky. There was still fight left in him as he continued to yell after Manu.
“What about him? What if he comes after us?” she asked.
“Oublie-le.”
She knew Manu was capable of violence but this was the first time he was blinded by his temper. That sort of brutish behavior was never accepted from her paramours in the past. The need her former lovers had to possess her or tame her wild streak drove her away. Manu spoiled her with his macho displays and need to protect her.
Their encounter a few months prior was tense with first time jitters and sexual urges. He kissed her after he went outside to smoke a cigarette he rolled deftly. Morgan objectified him the first day she met him. His hands and long, slender, dexterous fingers were the first things she noticed about him – they starred in her fantasies. She imagined the internal and external massages she’d receive from those fingers.
Morgan didn’t mind the taste of cigarette on his tongue. She set him up in the bathroom so he could shower. She caught a glimpse of their profiles in the mirror as he cradled her face while they kissed. She resisted the urge to touch herself. She wanted his fingers to be the first to pierce through the moisture accumulating in her panties.
Manu didn’t bother to get dressed after his shower. He wrapped the towel around his waist and went back out to the living room. She caught her breath as he filled the doorway with his frame. She scrutinized the front of the towel to preview what was to come. Her soap took on a sensual aroma on his skin and hair. The towel opened slightly, revealing one thigh when he sat on the couch. While they talked, she kept to her side of the couch trying not to get caught stealing glances at his body. She squeezed her hands between her thighs right above her knees. Otherwise that nervous energy would erupt. Manu said mid-sentence, “I want to kiss you again,” and he did.
Morgan was in her head instead of in the moment because of her nerves. She thought about whether she was kissing with enough tongue or too much lip-sucking. The soft scratch of his  shadow distracted her from the decision of turning her head to the right or to the left. She sucked in her stomach when his hands wandered. The voice inside her head told her to ‘let go and enjoy’. She took a leap and put her hand on the back of his head. The tickle of his hair through her fingers and the base of his skull in her palm made her feel powerful.
She felt even more powerful on her knees before him. His knees spread, head thrown back, fingers digging into her shoulders. Morgan’s tongue danced around him, both wet muscles in her mouth pulsing. The faint scent of soap was washed away by her saliva. There was no pubic hair to speak of for any scent to linger on.

If you're in Paris and purchase a copy of my book, I'd love to know what you think of my book. Leave a comment here, on Amazon or The Darker Side of Lust homepage.


Amsterdam, you're next. I've been in contact with The American Book Center...