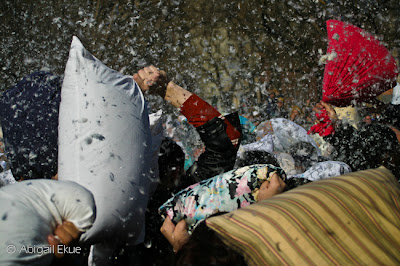 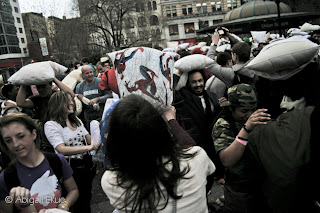 When given the chance to play, people play.

It's an unbelievable release. I didn't get to activitely participate in the NYC Pillow Fight in Union Square yesterday because I was there covering the event for a piece I was writing for KittyBradshaw.com. Yet being around people who were having such a good time, the positive energy rubbed off on me. I also think the few thumps I took to the head might've done something to the mood center of my brain.

Now back to the people at play.

I really dug this woman's energy! She took on all-comers! I found myself cheering for her. And because she was so "tough" more folks kept coming for her. When the guy she was with hoisted her onto his shoulders to give her a bit of an advantage, another pair challenged them to a game of chicken without the pool. I started at chant of "Joust! Joust!" Did I want to see someone go crashing to the concrete off of their partners shoulders? No, just got a little caught up. 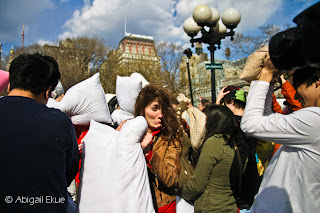 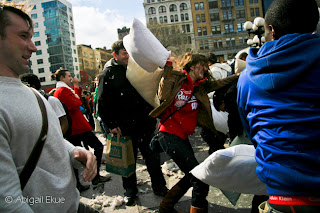 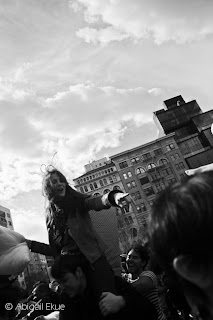 What is it about climbing things? Human beings really love to climb! I was a climber too. In the right circumstance, I'll scamper up a tree in a heartbeat. It was so funny the number of people that were climbing the lamp posts in Union Square. Part of it is the mob mentality, part of it was trying to escape but I think the other part is just this primal desire to ascend. 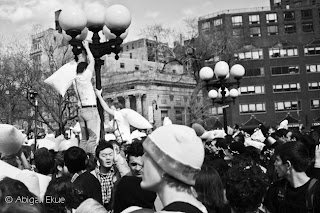 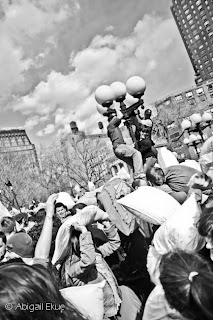 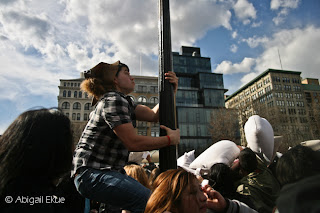 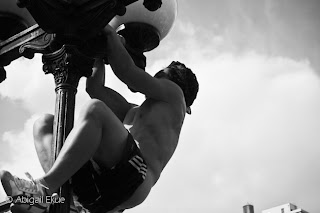 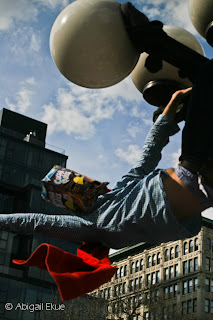 I think this is my favorite shot. I captured the moment of impact. 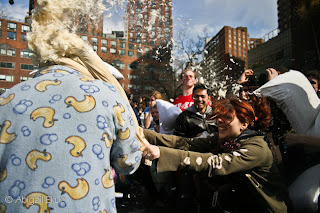 There were moments where I barely escaped being clobbered or being pushed backward down the steps in Union Square. But I was focused on what I had to capture. Anything for the shot. Some of you know how much I love night photography. I'd also try my hand at sports photography. First, I enjoy sports. Second, I have great perception of what's coming next. It's important to be able to anticipate what's next so you're ready to press the shutter button.

These two guys did pillow capoeira! This chick typing this blog got a thing for hand-to-hand combat. 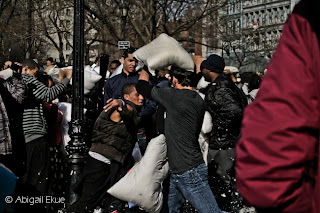 In the midst of it all I wanted to take a self-portrait. I had so many feathers in my hair and on Little Red that I wanted to take a photo. Then I got distracted by something--another climber, another flying pillow?--and this is the shot I ended up with. 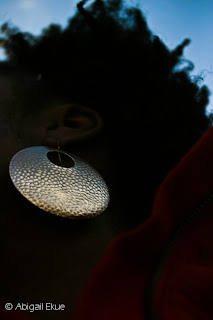 I captured over one hundred moments of the NYC Pillow Fight. I think the photos are best viewed as a slide show because you can see the hits, watch the expressions change, maybe even catch a glimpse or two of flying pillows! I'd love to know what you think!


Were you at the NYC Pillow Fight? Did you attend one of the Pillow Fights in the other cities celebrating International Pillow Fight Day?