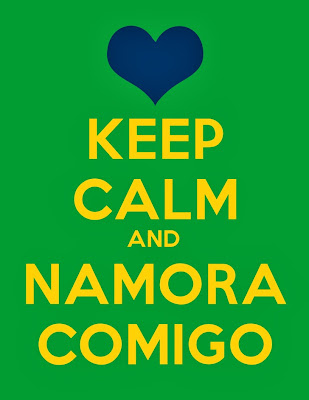 I received the informative and timely email, Paquerar & Namorar, about the way Brazilians "flirt, hook up and hang out". I enjoy such social anthropological type-writings and only a 2 days prior, I'd met a dynamic Brasileira and our conversation landed on the topic of dating and  the what-to-do-whens.


I forwarded the email to my friend Danilo, a São Paulo native, and he confirmed that the article was very accurate. Some of the sentiments the Brasileira shared with me at the dinner party were included in the piece. The conclusion: the rules of love and dating apply to men and women.


I'm a hybrid of both worlds — USA and Brazil. Women and Men.


...there’s no shame at all in letting someone know that you are attracted to them. (Just like there’s no shame in hugging friends, or telling people you miss them, or wearing skimpy bathing suits. Sensing a pattern?)

I'm on board with this. I let a man know I'm down for the get-down, and then I let him take the lead for a bit because I enjoy being "courted like a lady". I know some men like "the chase". Men however will chase what they know they'll eventually catch. I too, will chase knowing I'll catch a man. I'm also down with hugging friends and wearing skimpy bathing suits. This is a no-shame zone. Vulnerability encouraged.


There’s also no reason to be embarrassed if you’re rejected. Instead, you should consider trying again.

True. I don't fear rejection from men. The times I have been told "no", there's always been a caveat:

no, I have a wife;
I wish but I'm leaving the country;
Aww man, I just started seeing someone;
I'm in a troubling time (I love my ESL men).

It never feels like rejection. No with and asterisk, is not a terrible thing. However, I've been the object of desire of some persistent men. This is why I never make excuses for my no's. No is no. Not "no, but..." or "no, not today." I do not like men who don't respect a firm no and still expect me to be available to them.

Here’s the thing: in many (though not all) Brazilian circles, making out in public is more or less the equivalent of getting someone’s number. If you meet someone, and you like them, and you’re at a place where it’s appropriate, you kiss them. You might see them again, you might not.


Here's the thing, IDK if PDA is for ME. Just ask me for my number or I'll ask for yours. You don't have to kiss me. With your tongue in my mouth. Not necessary when we've just met. I can like you a lot and still won't kiss you for a long time.

A few other notes: don’t play games by waiting days to call. In Brazil it’s the next day, at the latest. Also, in Brazil there’s no formal “dating” culture. Meeting someone in a bar and then asking them to dinner is fine, but you can just as easily make informal plans to meet—even with a group of friends.


Totally agree. I'm not with the games either. You gotta love the people who wait to call and then get their feelings hurt that the object of their desire has moved on. Oh well. You snooze you lose.

The rest is similar to what the Brasileira complained about. Later in the evening she received a text from another potential partner asking her what her availability was like next week. Where's the spontaneity? Who plans things a week in advance? These were the burning questions Brasileira had for me. Things are too planned and professional for her liking here. They don't date in Brazil; she's getting used to the whole dating process now that she's newly single but doesn't like it.


In my life, I may have other commitments and obligations and because of those, I can't be spontaneous in romance or hook-ups. But I have found myself trying to deal with men who are all about work and a goddamn calendar. It is pretty frustrating. Brasileira is an artist so she lives a less rigid lifestyle. The woman she likes is an architect and lives by a schedule. That is something she's going to have to deal with, at least in the beginning while they're still getting to know each other or move on I explained.

By the time I'd heard this story, she hadn't been in touch with that woman for about 2 weeks, still convinced she was being played. Perhaps Brasileira should date other people too? When I asked if that was an option she explained she's not that kind of person; she likes to meet and connect with someone. Why spend 6 months of great sex with that woman when it may not turn into anything long term?

That's where Brasileira and I differ. Any relationship you enter into has the chance of ending one day. I can go into a fling knowing and accepting it's a fling—enjoy the 2 months or 2 weeks, peace out and cherish the memories. In the case of Brasileira she's recently out of an almost decade long relationship and needs time. It's understandable. But this Menina Preta right here doesn't knock the rebound. It's always an option if you can handle it. A rebound fling (I emphasize fling) can be a great way to take the edge off and feel better about yourself. Go in with your eyes open.

One thing is more formal though: there’s none of this gradually becoming a couple, with gradations from “We’re seeing each other” to “We’re dating” to “He’s my boyfriend.” In Brazil, you are expected to formalize the couple status. And the way you get there is not to initiate a “Let’s talk about our relationship” conversation, full of awkward pauses. It’s this: “Quer namorar?”[ker nah-mo-RAR?] That’s “Wanna be my boyfriend/girlfriend?” (The appropriate responses are“Quero” (“Yes,” preferable) or “Não quero” (“No.”))


That's cool. They get to the point. None of this guessing or assuming or waiting for the other person to magically figure out what you're feeling that a lot of people here in America rely on. I'm curious, if someone says no does the couple return to paquerar? Can you namorar with one person and paquerar with someone else?


So just how does one namorar? Lots of physical contact for starters. There may be times when it is less appropriate to be touching or caressing or kissing your partner, but there is virtually no time when it is inappropriate. This leads to what American journalist and former São Paulo resident Seth Kugel has called the “get a room culture.” Kugel recently wrote an op-ed piece describing how he deals with this issue when dating a Brazilian.

I guess that explains the Censiv Motel in São Paulo. The Liberty Inn here in NY got nothing on it (but it's still a lot of fun!) In my experience, the public caressing and kissing is a non-American thing not just a Brazilian thing. Personally, it depends on the man how much I allow or how far I will go in public. Or perhaps how much cachaça I've had (Ha!) I definitely don't touch them as much as they touch me.

Where do you fall on the cultural dating spectrum? Are your rules or values any different? Does it depend on who you're dating and where they're from?

After a few back and forths with Danilo, he signed off his last email with: