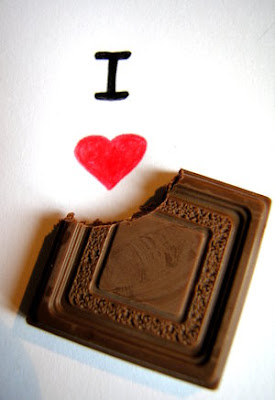 A friend and I stopped in at the Doughnut Plant (not the original on Grand St, the one on 23rd st). "That one!" I pointed at the Blackout cake doughnut on the bottom shelf. No other doughnut existed. A man in front of us heard my declaration (or demand) and agreed it was a great choice--it was delicious and when you bite into it all this gooey chocolate oozes out of the middle. Yeah, yeah, thanks buddy. One, he was standing in front of the display case so I could no longer see the doughnut and two, standing there talking to him meant I wasn't at the counter ordering said gooey chocolate goodness.

My friend ordered the Blackout along with another flavor which quite frankly isn't important right now. True to it's description the Blackout was a piece of chocolate cake in the shape of a doughnut. My friend and I nodded and agreed it was delicious. I broke off another piece. "Oh, there it is..." Chocolate goo peeked from one end of my piece. "Break a piece off from this side..." I advised my friend so he could partake in the cocoa goo mouth party.

I walked through a Farmer's Market in Journal Square, NJ. I zoned in on a baker's stand. He was selling brownies. I checked the label (sugar, chocolate, milk, butter) to make sure he was using ingredients I like. Give me my fat and gluten, please. I was a bit disconcerted that he had his brownies individually wrapped under saran wrap floating in the center of a Styrofoam tray. Perhaps the Styrofoam is what dried his brownies out terribly. It took me 4 days to finish that thing.

Two booths away I spotted brownies that were almost midnight black decorated with chocolate chips. On sight, you could tell those brownies were delicious. "I'd like a brownie, please." He packed my brownie in a brown bag and off I went. I broke a piece off--chocolate stuck to my fingertips, my tongue and the roof of my mouth. Ladies and gentlemen, we had a winner! Brown Bag Bakery was divine. I actually felt like I needed a glass of milk to go with that brownie--so rich and thick. And the flavor--authentic chocolate. There's no denying that pure dark chocolate was used and not milk or "watered down" chocolate. That brownie left oil stains on the brown bag and a love stain on my heart.

Thursday night, after sipping Saki and Japanese beer, a friend and I went foraging for treats. "I know a place on Ludlow and Houston." I told her. The starkness of il laboratorio del gelato beckoned us against the dark, chilly evening. I approached the display case with zeal expecting to be stumped by the dizzying selection. Not tonight! "Hello, Abigail. I've been waiting for you," called the Thai Chili Chocolate gelato. I think you know what happened after that. I announced my decision. I ordered a three-flavor serving which also included the Amaretto Crunch and Cashew.

A sound of pure pleasure escaped me as I finally reached the chocolate gelato at the bottom of my serving cup. The familiar warm embrace of dark chocolate enveloped my tongue then BAM! the bite of the thai chilli. I was thrilled by the warming yet cooling sensation of it all--I was excited and confused by the whole experience. I liked it a lot. I love spicy food and up until that point couldn't remember having another spicy, cold dessert. Another winner!