How to Get Him to Commit to You 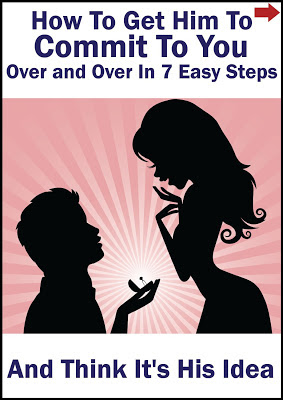 I downloaded How to Get Him to Commit to You Over and Over in 7 Easy Steps and Think It's His Idea by John Alanis this weekend when the free download link was on my Kindle. Free? Ok, can't hurt. Plus I had to read what a man would tell women about getting men to commit.

Turns out he told the truth. The hard truth. The truth your "head-in-the-real-world" girl friends probably told you before but you didn't heed.

Here are the things I was totally on board with:

Date More Than One Person  --  Don't make getting you easy for him. This is not the same as playing hard to get (which I hate). Let him know he's competing, he could lose you at any time. Have a "crop of men" (Thanks, Evita!). Let him work for you. We are animals. In the animal kingdom, the male of the species have to fight for the right to mate, or they prance around to get a female's attention. And even then she can decide, "Meh, you ain't for me dude." I don't suggest you rub it in a man's face that you have others lined up, but do be honest about it. This doesn't mean stringing anyone along though. Spend time with people you actually like and who treat you well. That should be a no-brainer but it must be said.

Alanis' words: When a guy knows that you are seeing other men, he knows he has to work harder than whoever else you are involved with if he wants to be the one that ultimately wins you over.

Have A Life  --  Men can smell desperation. They know when a woman merely wants a man, any man. And they'll use your "resources" until someone else comes along. Don't sacrifice yourself and your desires for him; you'll resent him. You'll resent him even more when he's not doing the same for you, and why should he? Your man should not be your first priority. Have other interests and yes, other men, to focus your attention on.

State Your Needs  --  State them clearly. Don't pussyfoot around the topic of commitment, no matter what form of commitment you want. If you don't tell your mate you want a commitment, you won't get one. I've had men tell me they ended up with their gf's because the women they were dating told them what they wanted and they wanted the same thing too. Do not expect your man to read your mind. No, he's not supposed to "just know". Just because you've been on 3, 10, 20 dates, if you've never had the let's-be-exclusive conversation, and that's what you want, you're gonna get your feelings hurt. You can't assume he wants what you want when you want it. And it doesn't make him a bad guy if he doesn't. State your needs... but NO ultimatums. Ultimatums scream "insecurity" and "control freak". I wouldn't wanna commit to you either.


Maintain Your Standards  --  Alanis: "Men don't always know what you want and need but they will know when they cross the line with you and respect you for sticking to your standards." Yerp. I'm quick to lay the ground rules when dealing with a man. And quick to drop a nucca when he acts up. Be careful with the patterns and the precedents you set, ladies -- if he knows he can always contact you last minute and you'll jump that's all you'll get.

Accept Rejection  --  He may not want a commitment. When he says "I don't want a relationship", "I'm not ready for a relationship" or any derivative thereof, you can't cook him dinner enough, do his laundry or fuck him into thinking he wants one. Simply walk away. Remove the attention and affection. If he's into you, he'll come after you to find out "what's up?" And here we go back to stating your needs. When he does come after you, that is not the time to attack him for not knowing "what's up". Enough with the mind games and bitch behavior, ladies. When he says no and you walk away and he doesn't come after you, let it go. He said he didn't want a relationship so that's why he didn't come after you. Side note: When he's done something to piss you off or hurt you, he ain't gonna figure it when you give him the silent treatment.

This is how Alanis put it: If a man says he's not ready for a relationship or doesn't want one, pay attention to his words over his actions. You have to be prepared to walk away and this can actually help you in the end.

Don't Steal His Freedom  --  Self explanatory. Let him play golf, video games, etc especially if that was stuff he did when you met him. Refrain from turning him into an ugly-Christmas-sweater-wearing Stepford Husband. Stealing his freedom is a form of trying to change a man. You can't do it. You may refer to yourself in the third person, you may truly believe you are Superwoman but the reality is you can not change a man.

I'm more aggressive than some women. But men still come after me. I'll say it one more time: I let a man know I'm interested and he takes over. I don't do the work. I'm still surprised I ended up "with" most of them. Alanis: "The moment you start texting him and calling him and taking the role of the hunter, he really does lose interest because he realizes that he has you hooked." Alanis points out this is especially true in the early stages of dating. I agree. It's ok to text to follow-up, but the "check in"? Nah. But if the dynamic is straight-up booty calls, do you gurl -- get that peen!

Email ThisBlogThis!Share to TwitterShare to FacebookShare to Pinterest
Labels: books, commitment, communication, dating, How to Get Him to Commit to You Over and Over in 7 Easy Steps and Think It's His Idea, John Alanis, men, relationships