Undertaker vs Brock Lesnar at Wrestlemania 29 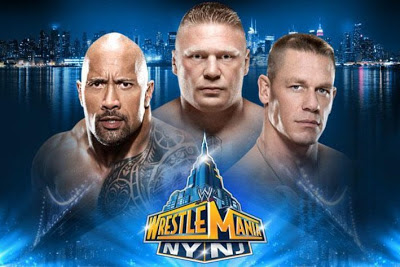 After Brock Lesnar's return last Monday on Raw I was excited. It took a week to hit me -- "why?". I do NOT want to see him anywhere near Ryback. We already had Lesnar vs Goldberg at a Wrestlemania. No good. I've seen the above image floating around the interwebs. Add The Undertaker to the promo image and we're set. That is what we need to see - The Undertaker vs Brock Lesnar.


Set up: Brock crossed The Boss last week (fracturing his pelvis in the process). Brock thinks he's a big shot, the Big Dog in the yard.  The Undertaker will show Brock whose yard it is.

Now for this to be the best it can be and not merely "good", Undertaker is going to have to come out of hiding for the next 2 months to really build momentum going into Wrestlemania 29. We have  the potential for a 2nd headliner - to go side-by-side with John Cena vs. The Rock - bigger than the World Title match (Sorry, Smackdown). He is a man pushing 50 with numerous surgeries under his belt, but as long as The Undertaker's healthy and gets clearance and we're sure Lesnar can work a safe match with him, I say go for it. An Undertaker in top form will surely provide a match with tons of brute force and brutality. Perfect compliment to Lesnar. Not to mention the submission holds. Who doesn't want to see The Undertaker lock on the triangle chokehold, Lesnar tapping out as his blood trickles down his arm? I do.

WWE Creative, I hope you're listening. I know you're big into social. Media. I hope you read blogs too. I'm abigailwrites on Twitter. I'm available for a creative writing position or paid consultation. I will apply for photographer's credentials for the Wrestlemania Diary and I can assure you I'll provide riveting, storytelling images such as these: