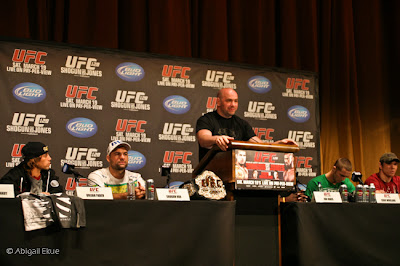 This afternoon I attended the UFC 128 Press conference held at Radio City Music Hall. The event was free to the public. When I first arrived I cursed myself for getting there after 11:41. The lobby of the Radio City was packed. I was still able to make my way over to one of the concession stands and received one of the T-shirts they were handing out.

Once they let us into the hall, the aisle I was on was crawling, so I hopped over the ropes and hightailed it over to the other side. I was about 12 rows back, but I had an aisle seat. I was happy. I watched the UFC and media setting up and the Radio City ushers doing a great job keeping order. 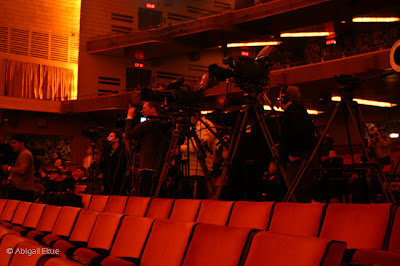 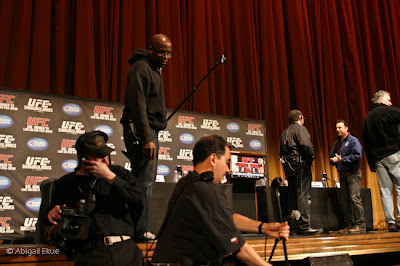 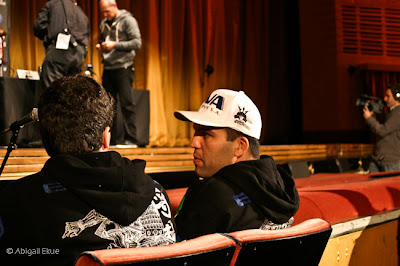 I noticed about 5 seats open up down front so I motioned to the usher when she looked in my direction. I asked if those seats were free and she said yeah. I don't even think I listened completely to what she said, I was in that seat in a heartbeat--fourth row from the stage on the aisle. 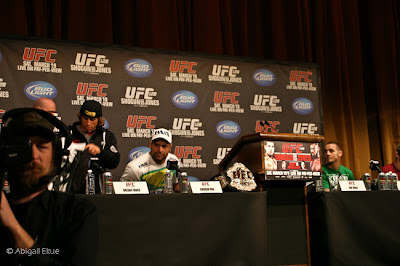 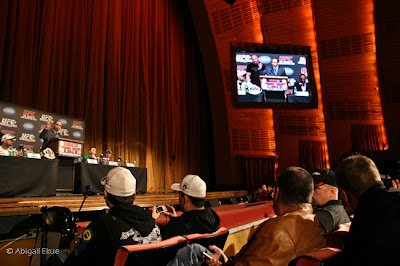 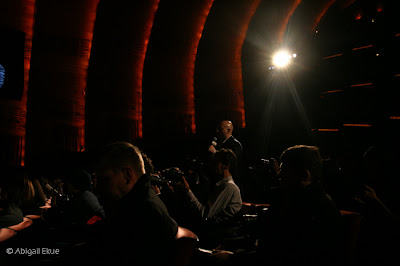 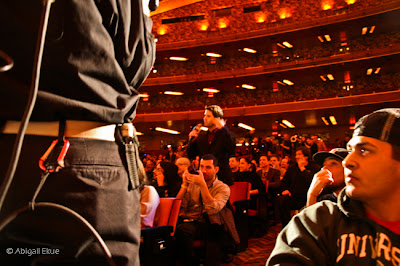 Once the conference began they riled up the crowd and spoke about bringing UFC (MMA) to New York State. That'll be a great day! I'm all for it. Madison Square Garden not hosting a UFC event just seems odd. The event will be held at the Prudential Center in Newark, NJ on Saturday night. Dana White stated they were ready to take questions. A guy sitting right in front of me raised his hand and called out. White assured him the fans would get a chance later in the press conference but the floor was open to media at the moment. A few questions were addressed to the other fighters, but a majority of the questions were directed at Mauricio "Shogun" Rua (@shogunrua). His translator earned his money today! 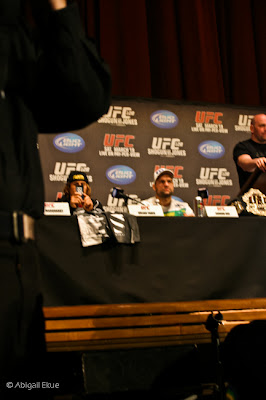 I snapped a photo of Urijah Faber (@urijahfaber) snapping a photo of a fan who was sleeping. I mean, knocked out--head hanging back, mouth agape. It was a mess. I love that the fighters enjoyed themselves as much as the fans! I swear Faber smiled the whole time. 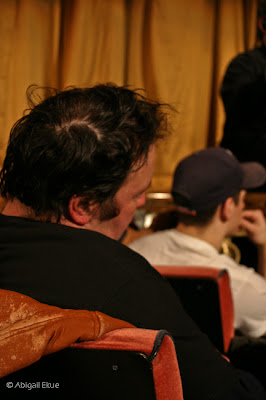 This is the Sleeper after he'd woken up briefly but started nodding off again. 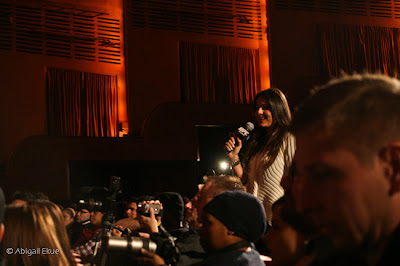 The hall filled with whistles and catcalls when she stood to ask Shogun Rua a question. The plight of being a woman in sports. She handled it well.

A pair of twins, Marissa & Marianela Gonzalez, were also in the press pool. They put Dana White on the spot asking if they could get tickets to Saturday night's event--for them and two other sisters! Work it, ladies!

The floor was now open to the fans. The first few at the mic had actual questions. One guy asked for tickets. Turns out last year, Dana White made a promise that the first person to ask for tickets would get them. And he remained true to his word and awarded the fan the tickets. He informed everyone else to follow him on Twitter (@danawhite) for a chance at other tickets. 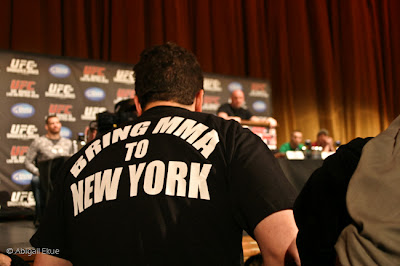 This guy rambled on about his sleep apnea surgery and how he's attended UFC events all over the world. He asked for tickets. He was told again to follow Dana White on Twitter. Nice try, buddy. 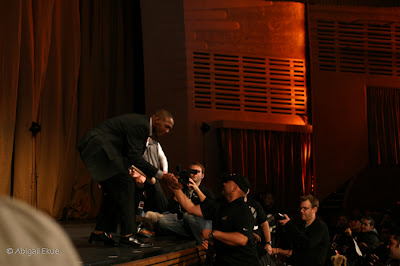 Here, Jon Jones (@jonnybones) is greeting the man who will walk him to the ring on Saturday. The fan, a veteran, asked what he'd have to do to get an opportunity to walk an MMA fighter to the ring. Ask and ye shall receive. When I get the opportunity, I'll surely ask for the opportunity to interview a fighter or document their training--I'm a writer, photographer and an ATC. 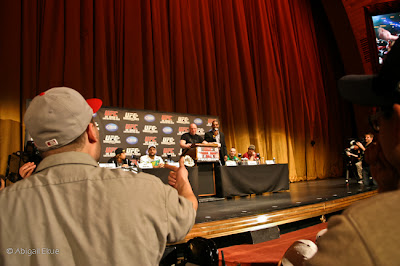 Anthony was sitting next to me, a Shogun Rua fanatic, got the chance to ask a question. He asked Jon Jones to stand and then asked Jones if he thought he had a chance against Shogun on Saturday. Challenge made. Challenge accepted. 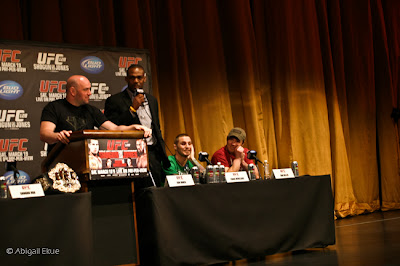 After the press conference, some of the fighters signed T-shirts, posters, gloves etc. It was great the time they took for the fans. I was in the midst of the organized chaos snapping shots of what I could before making my way all the way to the other side of the hall to get some shots of Jon Jones (the man was wearing a suit, how could I not?) and to get an autograph. Once I made my way through the crowd to the front, I just called out to him once. He looked at me, nodded and said, "I got you." And he did. Right after that he signed my T-shirt. One woman tossed her tank top to him and he signed that too! 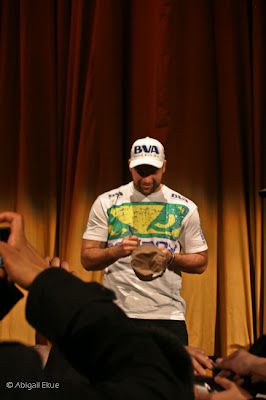 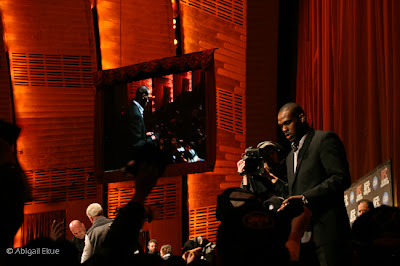 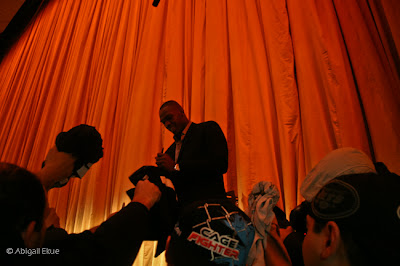 Just when you think it's safe to put your camera away... Jones came back onto the stage with a bag full of UFC memorabilia. He signed them and tossed them out to the crowd as well. I was a fanatic during the days of Tank Abbott, Royce Gracie, Ken Shamrock, Mark Coleman and Dan Severn. I know of Tito Ortiz, Randy Couture and Chuck Liddell. This event was enough to rekindle my love of the sport. And that's the point. When companies/leagues/teams host events for the fans they show their appreciation for loyal fans and quite possibly gain new ones. 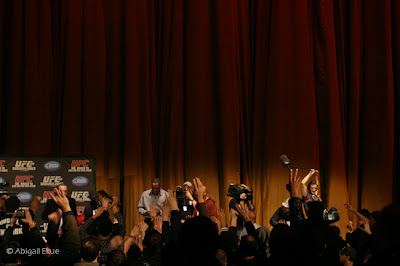 I'll be tuning in on Saturday night. Will you?