I receive compliments about my hair regularly, both when I'm rocking my afro or extensions (braids or twists). I smile and accept graciously. Sometimes the compliments are followed up with questions of what I "put in my hair", or if I do other people's hair once they find out I do my hair myself. One time, I was approached outside Grand Central Station by a fellow natural sister. We chatted briefly about my hair. The end result was an interview on Coily Crowns.
My hair loves the compliments too. She stands a bit taller and dances (whether there's wind blowing or not). She has a mind of her own.

Yesterday, I was on my way to dinner and while on the subway platform a woman turned around and said, "I love your hair!"

I smiled bigger than usual. I needed that. I had a frustrating afternoon and I was already late to my dinner date.

"That's what I was trying to accomplish but the perm..."

I interpreted what she said to mean she had a perm and tried to curl or crinkle her hair into a similar pattern. I shook my head and said, "No, it's natural," referring to my hair.

"Yeah, I was natural. But I was getting ready to go somewhere one morning and had a jar of perm in my fridge so I just put it in my head."

I continued to listen. I took a visual scan of her fine/thin braids and hairline. This was becoming one of those confessionals I'm subject to frequently.

"But I don't like the perm, so that's why I have the braids now so I can go back to being natural."

That I understood. She'd grow out her perm and then do a big chop at some point. The detective/therapist in me resisted the urge to delve deeper into her previous statement. Did she think she couldn't pull off a style similar to mine? I'd heard that one before -- "Oh, I could never do that."  "It looks good on you but..." Did she feel the only way she could style or "manage" her hair that morning was to put a relaxer back into her hair? Has this been a pattern of hers throughout life? Whatever she decides, I wish her well on her future hair endeavors. 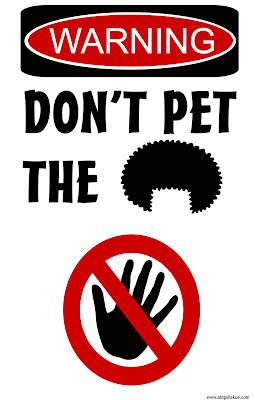 Side Note: Later that evening, my dinner companion also complimented my hair. With his hands. He did apologize and said he just had to touch it. I was fine with that. There was no need for him to apologize. The night before, he pulled on the single coil that was hanging down my forehead. When he let it go we smiled as he watched it bounce back into position. He wasn't a stranger petting me like a dog. Get it? I know him and it was a sign of affection and endearment. That, I allow.


I'll always accept compliments like a lady. No need to touch. Besides if you touch my hair, you'll mess with her rhythm. You never know when she'll start to dance.

Don't Pet the 'Fro on Tumblr