"Back" To Paris By Way Of FIAF 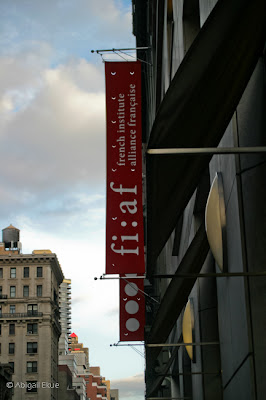 My first memory of wanting to go to Paris was between the ages of 6 and 11. I know it was that time of my life because of where my family was living at the time. I was watching Babar on HBO. In the episode he was driving down the Champs Elysées at night, during Christmastime. I remember feeling that I have to do that one day. I guess that's when this all started.


I attended the FIAF Travel Day Fair, yesterday, March 22, 2011. The first booth I visited was Call in Europe. A phone and my food are the most important things to me when traveling. Discussing the phone options in France reminded me of a conversation I had a few weeks ago at Les Enfant Terribles. A couple, who are regulars there as well, were going to Paris to get married. They were picking the brains of the staff about where to go, what to do etc. My friend, and bartender, told them about The Phone House where they could get cheap cell phones to use. I laugh thinking about the man's quip, "It's not Le phone house?" I added my notes to the inside of their travel guide by referring them to Real Time Travlr (the Founder, TastyKeish, is one of French connections).

Next, I received information from American Airlines. I'm an Advantage member, but I recently closed my account with Citibank that was linked to AA Advantage. I have to check into keeping my miles until I'm ready to use them. I check airfares to CDG and NAP often.


As I spoke to the representatives from France Today magazine, I was approached by a tall, gentleman who said he saw that I picked up some information from the Martinique table. He invited me to return to the table once I was done learning about France Today. Their April issue will be about Paris!


As promised, I went back over to the Martinique Tourism table to listen to what Julien had to say; he really didn't have to sell me on it at all. I already had the brochure for La Suite Villa and the flyer with the travel deal prices; I got plans! The exchange started with a geography quiz and a "where are you from?" He said I had a Caribbean energy about me. I told him my genetic-geographic make-up. He thought it was a nice mix. He used words like "gastronomy" and assured me the volcano that destroyed Morne Rouge and Saint Pierre a hundred years ago wasn't active. I'll take a taste of France by way of the Caribbean first if that's the way it's meant to be. My last French lover told me about the 7 years he spent in the French Caribbean and another friend recently took a quick jaunt to St. Bart's (he lived there for 2 years before coming to NY from Paris).


Next stop: Girls' Guide to Paris. It was great to put a face behind the Twitter and Facebook avatars. Turns out I was speaking to the President/Founder of the company, Doni Belau. We talked about how beautiful Paris is, Monaco, French movies (which reminds me, I still have to write my 2 Days in Paris post) and the language courses available at FIAF. I need to take advantage of those. One of the first things I learned how to say is, "J'ai faim." There's no way I'd allow myself to go hungry! I need to have more than basic conversation though. I'd also love to be able to seduce a man without whispering 'baise moi' in his ear. Belau said she can "see me" in Paris and having a friend I can stay with when I go there is a huge plus. I still have the numerous texts my friend has sent me all signed: See you in Paris! <:)>


"I don't drive but my travel companion probably will!" I said. I proceeded to listen to the presentation on Renault Eurodrive from Bernard D. Frelat with the piercing blue eyes. They provide affordable short-term leases of brand new cars, insurance included. And you can return them anywhere in Europe. Visions of cruising along the A8 or A57 before heading SE to Leece, Italy danced in my head.


Since I do want to start my trip in Paris, maybe I'll head NE to Belgium. I grabbed a Spa Tourist Info 2010 brochure first. The Belgium must've seen something in my eyes because he lead me over to the tasty section of the table--2012, Year of Gastronomy in Brussel and French-Speaking Belgium (Stay, Eat and come back for Seconds), Brussels gourmet guide, 45th Edition, and a gourmet map. He also told me about the Belgium restaurants in NY that would be participating in Belgium Restaurant Week starting today. He offered me a bag to carry all the literature I was collecting. I went outside for a bit. All that talk about me food made me peckish so I was sought out a snack. After talking about Belgium and gastro tours I ended up at the Wafel and Dinges minitruck (@waffletruck). Gotta love the way things work out sometimes. I asked what they were offering during Belgium Restaurant Week - all he would say is they're giving away a surprise with every waffle purchased. I sat in Grand Army Plaza eating my waffle with strawberries and Nutella. 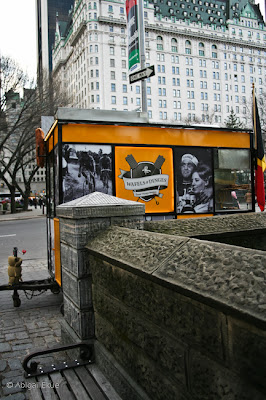 I didn't make it back in time for the raffle drawing. There were prizes from all the presenters. Including a trip to Paris or Martinique. I didn't win the trip. But I enjoyed the thrill of the "what-if".


I was thisclose to Paris in November. I was going for my birthday. But I had to use the money for everyday living expenses. So on my birthday a friend sent me this photo from his iPhone from the center of the Champs Elysées at night. So I'm saving up again. January 2012 is an attainable goal.