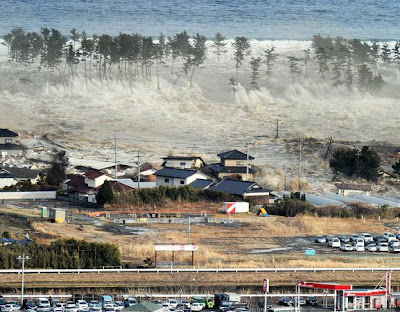 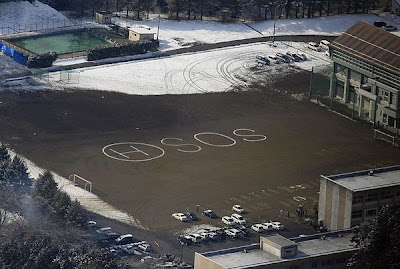 I've been following the developments of the Japan earthquake, the resulting tsunami and the aftershocks that are still hitting the island nation. It's all very sobering. The magnitude of this natural disaster is surreal. The main island of Japan has shifted 2 meters as a result. Let's hope Shinmoedake volcano doesn't add to the devastation in southern Japan. Despite all that humans do to the earth to make life supposedly easier for ourselves, the earth strikes back, showing us just how small we are. When you consider the fact that the continents were created from volcanoes and earthquakes, it puts everything into perspective.

I hope to scrape together some dollars to donate to a legitimate relief fund. The "SOS" photo above instantly brought "Message In A Bottle" to my mind. A charity re-release single may raise money. Sting or anyone else with the means and the clout to help should. The Japanese people need our help. But this will not be a call for folks to help their fellow man. If you don't already feel that way...

I was almost sucked in to the negativity on Twitter the day the tsunami hit. I was angry at the heartlessness and outright ignorance I was witnessing. I even tried to lighten my mood by pondering about Yonaguni ruins and what we could learn (or have already been taught) from the past. I made two comments and I let it be--I chastised those who complained about the snow we received this winter (or anyone who complains incessantly about the weather for that matter) and made note of the glaring ignorance of others.

Earthquakes cause tsunamis? How does and earthquake in Japan cause a tsunami in Hawaii? Do these people not know both nations are in the Pacific Ocean? Do they still believe the earth is flat? The questions were dumbfounding. I'm surprised no one tweeted: Aint Japan in China?

For some, their world is only a 20-block radius.

The most disgusting thing I saw/read was a compilation of Facebook statuses from people stating Japan deserved what happened to them because of Pearl Harbor.

I didn't write anything about this when it first happened because I was too glued to the BBC to even form thoughts. I'm still rambling now. So I'll just stop.