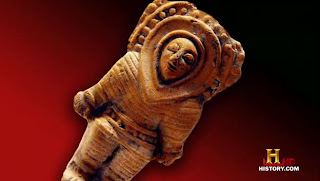 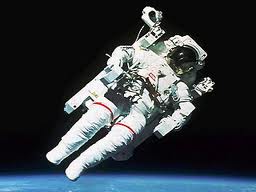 We've all been here before. No, not to my blog (although I appreciate the new and return visitors), but to this world, Earth. That's the belief of ancient astronaut theorists. They have found clues in religious texts and at certain locations around the globe to explain some of the human scientific breakthroughs, plagues and major events in human history.

Aliens, who are believed to be evolved humans, have visited this planet and planted seeds for our development and survival. Some of us receive these messages in dreams or via abduction. I would say those people are the "Chosen People" but that would be inflammatory language, now wouldn't it?


Anyone sit through the remake of Planet of the Apes? Remember the explanation of how the Apes' civilization came into being - Calima? A spaceship descended and the story evolved into their religion and the explanation of their origins and their god.


Same holds true for ancient astronaut theorists. I've watched a few episodes of Ancient Aliens for the first time last month. The show is in it's second season. Much of what they've uncovered in Egypt, Peru, off the coast of Japan etc. lead them to believe there have been numerous encounters with aliens throughout history. Stories in the Torah, Koran, Bible and other religious and ancient texts including the Mahabharata and Kebra Nagast are believed to be recounts of our ancestors encountering aliens. Not little green men with antennae but human aliens. I know that deeply religious people will write all this off as blasphemy, but AA theorists' beliefs can actual prove that stories of gods and angels descending to Earth, giants (David and Goliath), virgin mothers (Mary), Jews wandering the desert for 40 years, actually happened.


In the episodes that I've watched, they explained their theories on a number of topics including:


Reincarnation is the belief the someone's spirit comes back in another body after death. I think AA theorists take that belief one step further.


After one episode where they discussed time travel as a way that other humans were visiting us, it made me think about the Universe as a whole. If you believe that we are the only humans in the entire Universe, that's a very lonely existence. Maybe AA theorists receive comfort from believing there are other people out there. There is also the belief that there are aliens amongst us (3rd Rock from the Sun, anyone?) and that cross-breeding has taken place i.e. Hercules and other demigods.


I've added Chariots of the Gods by Erich von Daniken to my reading list.


I'll try to catch some more episodes of Ancient Aliens, preferably midday, so I don't have dreams about it at night. It's fascinating and creepy all at the same time.