NY Post "Subway Death Cover" Should Not Have Been Published 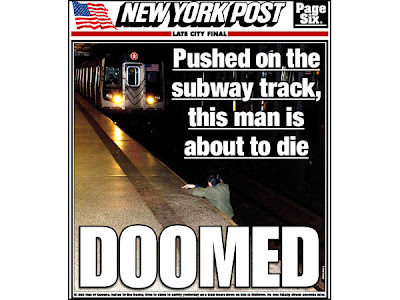 My first thought upon seeing the cover of the NY Post on December 4 was "whoa". I peered deeper at the image trying to get a look at the face of the train operator, physically empathizing for what Ki Suk Han must've been feeling, wishing it were merely a scene from a movie in which at the last second the man would hoist himself up on the tracks narrowly missing his real fate.


And I was disturbed that the NY Post chose to publish that image on it's cover (not to mention it's choice of headline). R. Umar Abbasi, freelance photographer, took the photo. I heard the story on WCBS 880 yesterday before I saw the image -- onlookers screamed and ran from the scene as the photographer tried to use his camera flash to warn the train operator. I can see the logic behind his decision -- a split second panic-driven decision perhaps (Malcolm Gladwell explains this well in blink). But what remains is that photo ended up on the cover of the NY Post.

Abbasi is taking a lot of flack for taking the photo instead of trying to help Han. His response: he was too far away. (VIDEO below). We don't know how far away he was from the scene. He could've had a zoom lens. There's criticism that he should've helped instead of taking the photo. That's an assumption that he was closest to the victim or the only one capable of rescuing Han. There's no one in the shot helping the victim either. Abbasi wasn't the only one on that platform; what was happening outside the frame of that shot is a mystery. This whole occurrence makes me think of "war photographers", editorial photojournalists whose sole purpose is to document what's happening not alter the course of what's happening. But that would only apply if it's a case of Abbasi knowingly taking the photograph.


We'll never know if R. Umar Abbasi intentionally took the shot of Ki Suk Han. Some of the most memorable photos are taken unintentionally. We don't know if he was actually on assignment that day. But the photo was taken. I feel the NY Post should never have published the photo. Personally, if I had taken that photo, it's one I would've sat on for months or years.