What a way to start the week!


On Monday night, I attended the premiere of Sarah Small's "Tableau Vivant of the Delirium Constructions". I'm always asked how I find out about these things so here's the brief history: Sarah Small is the photographer who shot me for Moregasm, she attended the opening reception for my photo exhibit, Man. Toy., I was contacted about being in a Tableau Vivant in October 2010, but missed the casting deadline.


I spotted a familiar face (and body) when I arrived--Sidney Etienne--one of the models. I also loved the interior of Skylight One Hanson. It's a beautiful venue. I'll put that on my list of places to check out in case I have to move my garden party indoors. The mosaic tile mural was an extension of the "living picture" Small created and vice versa. The performance was a homage to art history. Guess where she got the inspiration for this... The Louvre. Again, I loved the set. I don't know if my photos do it justice. 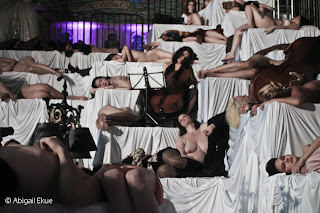 The performance opened with the models asleep or "dead". "They barely look like they're alive!" This woman behind me kept whispering. "It doesn't look like they're breathing." I watched, sitting really still as though I didn't want to disturb or distract them. Once the music began, the hum of the crowd quieted. I was excited to see what they'd do. I gave kudos to one woman afterwards for holding her pose for as long as she did. She was rock solid. There were so many characters to watch. So many individual stories to witness. Each time I swept over the entire tableau vivant with my eyes I discovered a new detail. Or sometimes a new person! Sarah Small chose "odd pairings" which, visually, was very appealing and told more of a story. Many of the models had great facial expressions and postures very reminiscent of Renaissance painting and sculpture.


I was impressed by the restraint the models showed. What if they had an itch to scratch? A sneeze, cough? Stomach grumbles? Muscle cramp? My only other exposure to a tableau vivant was on Arrested Development. Were any of the clothed people on the stage "never nudes"? 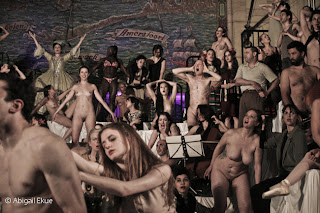 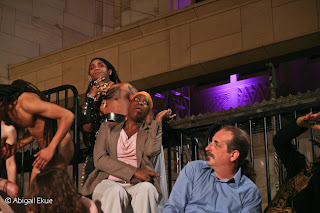 It was a powerful, magical moment when Sarah Small climbed into her "living picture" and brought it to life. The vaulted ceilings of Skylight One Hanson provided great acoustics. When Small joined a Balkan trio, all four of them sang Bulgarian folk music and the vocal vibrations were buzzed my seat. Small is also a member of an A cappella Balkan folk quartet, Black Sea Hotel--I received their CD in the VIP gift bag. Their singing and the strings, by Brooklyn Rider, were spiritual and eerie (I actually have their webpage open right now as I type to their music). Music is a powerful tool in setting mood. Near the end of the performance the models let out a series of collective sighs; the energy in the room shifted and I found myself exhaling along with them. 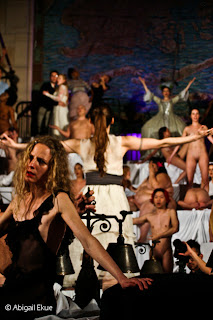 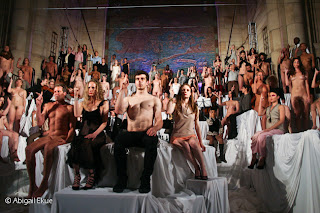 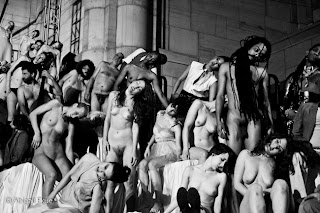 I appreciated the comfort level of the nude models. And being a studier of bodies, there was a lot of stimuli. I was both covering the event and attending as a patron of the arts, so I had to constantly switch hats. It was a staid procession as the models exited their "frame" and walked through the crowd to the back of the hall. There was great ease in their march. Alone on the stage stood Abigail Wright (another nude Abigail!) as she sung opera. I watched Sarah Small gaze at her with satisfaction. 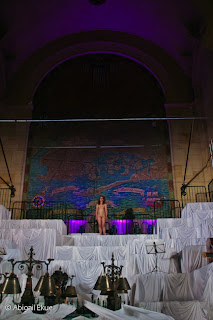 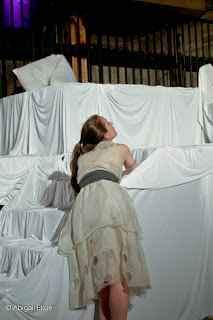 There was also a wedding during the tableau vivant; Sarah Small married the couple--Alexandrea Thomson and Siddhartha Dillon. My first wedding of the season. Please, let that be a sign that this wedding season won't be a repeat of last year's. The after party doubled as a wedding reception with the sort of dancing you'd expect at a wedding reception. I snapped some photos, had a few conversations with other guests about the event, the weather and my hair (that always seems to come up in conversation). There was one performer who remained nude throughout the after party. He was the only one. After a while, his skin became is "outfit" and I didn't even notice him. He talked to people, had his child with him and carried on like every one else. 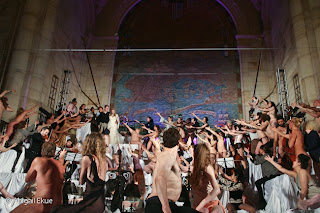 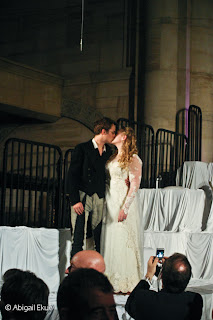 I'm sorry I couldn't attend any of the rehearsals because I had other events, but I did find out from some of the performers what they were like. I'll be sure not to miss the casting call deadline for Sarah Small's next Tableau Vivant. How many of you would participate in a Tableau Vivant? Clothed or nude? Does it make it easier that you wouldn't be the only one nude?


More images from "Tableau Vivant of the Delirium Constructions"... (some NSFW)