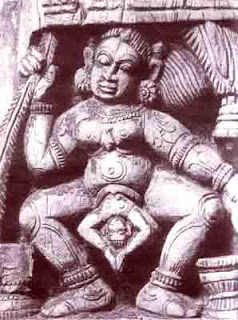 I had another "Aha!" moment this morning. Yesterday, I had a photo shoot for the upcoming Asana Exposed -- a photographic essay book on the transformative power of naked yoga from the creator of Naked Yoga NYC, ISIS Phoenix, with photographer Mike Cinquino. I've mentioned my naked yoga history briefly on this blog before. Very excited to be a part of this project!


During the photo shoot, ISIS Phoenix chose asanas that personified each of us (Cindee Rifkin, yoga instructor, was also a model at the shoot). One asana ISIS chose for me was Kali (Goddess) Pose. I'd never done it before and had a lot of fun doing it. Visually, it's a very simple pose -- wide squat, hands out to the side, tongue sticking out and a vocalization -- but internally, it's very powerful and freeing -- immerse yourself in Kaliasana and you'll quite possibly evoke Kali.

I researched the meaning of Kaliasana when I got home (I also found it under Utkata Konasana). Common thread: creative feminine force, used in prenatal yoga to prepare the body for labor and childbirth and in many tribes woman take the squatting pose during childbirth. The day before the shoot, I had a lunchtime discussion about that very thing--my desire to squat during labor and childbirth. I love that Isis knew that pose was "me".


After the photo shoot, I went to a bbq in The Bronx. There were so many beautiful brown babies running around and I found myself in another conversation about babies, pregnancy, childbirth, motherhood with a "Big Brother" of the group. You know how things work in the Universe, I may be blogging and posting actual pregnancy photos soon. We are in a New Moon...


Which asana feels right to you? Are there asanas that you feel the most at peace in, beautiful, powerful? Or an asana that challenges you and that's what you crave?


I'd also love to hear from any women who have squatted during childbirth -- how was the experience? Did you squat for one child and lie down/sit down for another birth; how do they compare? If you gave birth in a hospital, how accommodating was the staff?