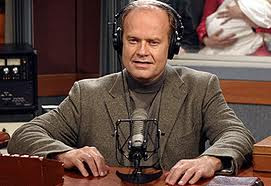 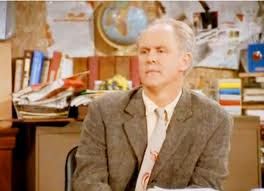 I would love to see Dick Solomon (John Lithgow, 3rd Rock from the Sun) and Frasier Crane (Kelsey Grammer, Frasier) meet one another. I think their character dynamic would be very entertaining and competitive. Just imagine all the polysyllabic chest-pounding!


Premise:
Dick Solomon and his family, Sally, Harry and Tommy are new tenants in the Elliot Bay Towers. But how/why do they meet? Dick is a new member or Frasier's wine club, or Frasier is giving a psychiatry talk at the same university Dick where teaches.

Both Frasier and Dick are pompous, multilingual and intelligent but Dick's naivete about Earth and total lack of respect for personal space would become glaringly obvious to Frasier. He interprets it as some sort of psychiatric problem that he must diagnose and treat. Dick mistakes Frasier's interest as friendship but when Frasier begins to label him and insist something is wrong with him, Dick is offended (Nothing is wrong with my brain! My brain is far superior to yours!) and the competitive nature of their relationship begins.


Frasier confides in Niles Crane (David Hyde Pierce) at Cafe Nervosa that something isn't quite right with Dick. Niles astutely points out that perhaps Frasier only wishes something were wrong with Dick.


NILES
Frasier, you may want to consider that there may not be
anything wrong with Dick. Perhaps this is simply your need
to find a flaw in an otherwise seemingly perfect man. A
man who overshadows your intellect by leaps and bounds.

FRASIER
Oh, shut up, Niles. Admit it, the man is simply absurd. You
can agree with me on this. I won't tell Sally that you think her
brother is certifiable.

NILES
Thank you so much, Frasier. She'd kill me if she found out.

NILES
No, Frasier, I really think she'd kill me. 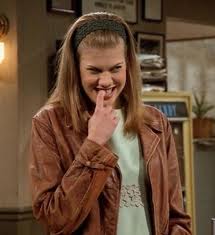 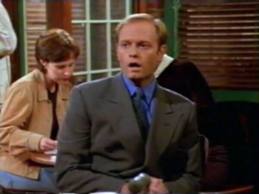 Niles and Sally Solomon (Kristen Johnston) are dating each other, after she pretty much clubs him and drags him back to the cave. In the beginning things are hot and heavy. Niles brings Sally to the opera and galas to show off his new trophy. Sally's aggression and lack of verbal filter will shock all of Seattle's elite. Niles can't help being enthralled and aroused by Sally's ball-busting ways. He also fears her and is too afraid to leave her.


Niles is only somewhat distracted by Sally; he's still in love with Daphne Moon (Jane Leeves), who is giddy with Harry Solomon (French Stewart). Her interaction with Harry magnifies her kooky English ways.

DAPHNE
You're not from here, are you?

DAPHNE
I mean, I'm getting an otherworldly vibe from you. You're definitely
not from Seattle.

DAPHNE
I knew it. You know I am a bit psychic. 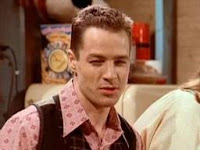 So Daphne and Harry get cozy. She's drawn to his eccentric virility and Harry considers her cooking "gourmet". After listening to a few of Daphne's stories, Harry is convinced that Grammy Moon is "one of them". There's also a special relationship brewing between Harry and Eddie, one Frasier is all in favor of because Eddie no longer stares at him all the time.


Meanwhile, Martin Crane (John Mahoney) and Mrs. Dubcek (Elmarie Wendel) carouse around the apartment half-naked, eating spam and Dubcek tries to impress Frasier with her stories of her affair with Kerouac. Why does the Solomon's landlady move with them Seattle you ask? That'll be revealed in a later episode.


Not sure where Tommy would fit in so, maybe he has a crush on Roz, but until we figure that out, let's have this take place while Tommy's away at college (the magic of being a TV writer!). With all the remakes on the big and small screen, this is one I'd like to see. With the original actors though.