It's A Small WWE Universe 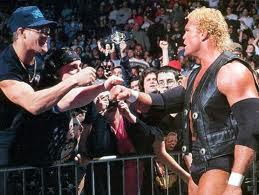 The WWE Universe is vast yet small. Especially to a die hard fan and in New York. On Sunday morning, September 11, on my way home from my doggy weekend, I boarded a bus. I noticed a man sitting in the back. He had a very familiar face. I stole glances and got caught looking several times. I was trying to figure out where I knew him from. My initial thought was his name was Vladimir. I remember him from the 1980's and 1990's--he was always at ringside at all the then-WWF PPV's and house shows at Madison Square Garden. I learned his name when he was featured in the then-WWF magazine.

Always listen to your intuition.


He wore a fitted Under Armour short sleeve top and pinstripe baseball pants. He also had a bag with his gear. I could tell he was heading to a game that morning. Perhaps he was a former patient at the sports physical therapy clinic where I once worked? Maybe a member of the gym where I used to personal train?


We both readied to get off the bus at the same stop. A smile. "You look familiar," I said. He returned the sentiment and says he was trying to figure out for the entire ride where he knew me from. Did I know his mother? His sister? At this point he'd since taken a seat across from me and I got a better look at him. This man has to be Vladimir. 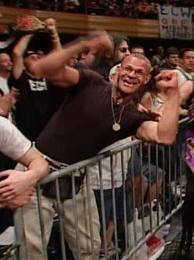 It was Vladimir the Superfan. We exited the bus. We walked and chatted for a bit. He formally introduced himself with a handshake. He told me he doesn't attend as many events as he used to--time and money--but he's still a fan. The only Wrestlemania he's ever missed live is Wrestlemania IX. "Ah, yeah, the one in Vegas." I nodded. The one that teased fans with a possible Bret Hart-Hulk Hogan follow-up title bout. He asked me if I attend shows--I can count on one hand the number of live events I've been to (PPVs and Monday Night Raw included)--but I bet I've watched all the events he attended or I've probably been outside the Garden trying to catch a glimpse of some of the wrestlers arriving. We turned the corner and stopped at the train station. He told me lately he watches and attends a lot of Ring of Honor and to look out for him at the TNA event coming to Manhattan Center. I let him know my brother's a TNA fan (I tease him about forgetting his WWF/E roots).


We bid each other adieu as I descended into the subway and he headed north to Central Park.


He's already got his ticket for Wrestlemania 28 in Miami. I'll scan the crowd for him.