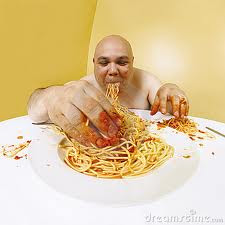 I had a meal with a man on Friday. As we walked through the LES we decided to go to Clinton Street Baking Company. So far so good. Chose the Chicken and Waffles off the menu. Ok, nothing to report about there. Then dinner was served.

He ate like a Neanderthal (no disrespect to any other Neanderthals who may be reading this). He attacked the chicken like it wasn't already dead. I took a photo of my plate and sent it to a friend who I'd made plans with the night before to go Clinton Street Baking for that very meal next week. By the time I looked up from my cell phone, he'd already devoured two pieces of the half chicken we were served, grease and food all over his face.

I picked up the chicken wing on my plate and he said he was glad that I wasn't above eating with my hands. I wanted to enjoy what I could of the food in front of me so barely looking at him, I told him I like to eat with my hands and do so the majority of the time. I know how to eat with my hands. I've been doing it all my life. And you, sir, don't have the skill.

Pieces of the fried chicken batter littered the table around his plate and a few crumbs landed near my plate.

He asked if I've ever had Ethiopian food and said they eat with their hands too. Yeah, ok, I know that, but I'm sure they don't eat like savages. I don't know if he was telling me about his experience with Ethiopian food to excuse his behavior but please... don't.

He threw down another chicken bone and ripped off a chunk of the waffle.

What seemed like mere seconds later he said he'd have to admit defeat and stop eating and that he was ready to sleep. Stop eating what? There was barely anything left on his plate. I made a comment about how he ate so fast that he didn't give his body or brain any chance to process what was going on. I also told him I don't eat a lot in one sitting (I should've added that I don't eat like a beast or quite simply a person with no home training). He said that my "smaller meals" were probably healthier. You think?

I announced that I was done eating. I just wanted out. So I had more than half my meal packed to go. I couldn't sit across a table from him and eat. The visual assault, the soundtrack, everything. He ruined a delicious meal. And it took him forever to use a goddamn napkin and clean his face. He continued to rip chunks off his waffle and stuff them in his mouth as I sipped my wine (perhaps a wine buzz would help). I wouldn't have been surprised if he'd opened his belt at the table.

Table manners are taught. I don't know if he ever was or just chose not to learn.

I should've known something was "off" when he grabbed at the biscuits brought to our table as if they were going to sprout legs and run away. If only they could've saved themselves...

We weren't on a romantic date. I'd only hope he does better when he is in that situation. But I highly doubt it.

When I text a friend about the situation she said she couldn't get the image of Danny DeVito as the Penguin out of her head. I couldn't either. I'm here to share the love. 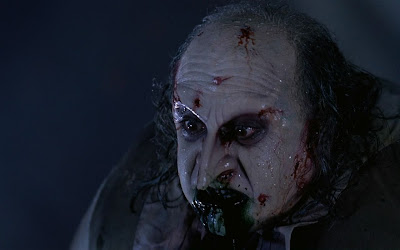