A Random Moment with TastyKeish


When I was invited to participate in A Monthly Bondfire's Ladies Night in 2009, I met her backstage to go over my place in the line-up and the pronunciation of my name. I remember she was wearing "sexy time pants". Since then we've become fast friends over boot camps and rum cake and gchat brainstorming sessions. She still amazes me with the extent of her DIY life. No stranger to the interview, TK!, as I affectionately call her, sat down with me after a Rise Up Radio show on a Friday night. Then we hit the streets. 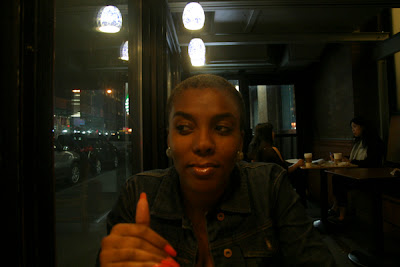 My name is TastyKeish, also known as my regular name, Keisha Dutes. My craft… media personality, professional hobbyist. I have lots of hobbies that I enjoy and I also enjoy making money off of them. So radio, video, web and all hobbies that don’t fit into that circle.

A Random Moment with Gregory Mulkern


Saturday night. LES, NYC. I ventured to Pianos for a friend's gig. Second on the bill was who I described on sight as a "lean gypsy". He proceeded to wow us with Turkish songs and The Wire. Solo. On September 12, I had the opportunity to experience the entire band at Jalopy. Before they hit the stage, I sat down with the lead vocalist for this interview.

My name is Gregory Mulkern. I’m from Portland, Oregon and I play banjo and sing with the band, Sold Only As Curio.

Another Random Moment with Tom Hatton


In June, I met up with Tom Hatton before his gig at LIC Bar with the band Gandhi in our first Random Moment. We focused primarily on his music and inspirations during that conversation. However, Tom Hatton is also an actor, TV host and New Media pioneer who has worked with major media brands and outlets Sony, Sky TV and Warner Bros. Read on to find out more about this multifaceted talent.

What is your definition of "New Media"?

New media refers to on-demand access to content any time, anywhere, on any digital device. For example web, broadcast, mobile and console devices.


How do you prepare for an audition?

It depends what it is for. If I am playing a character like I did by hosting the Harry Potter YouTube Channel, I primarily make sure I know my lines really well. If I am playing myself such as with hosting for Sky TV or for Sony's In the Qube, then I focus more on grounding myself in the material to be covered. For example, although not an audition, when I interviewed Julianne Moore I did a lot of research on her role in the movie. Then it's all about connecting person to person. "I'm gonna take some alone time before work...taking you with me ;)"  I received that text yesterday. I asked if he was texting with one hand. After a long break he said he was, that "I did quite well" and sent visual documentation of proof of work.

Michelle Obama and My Teeth The day after Day 1 of the Democratic National Convention, I was in the dentist's chair at NYU College of Dentistry. Once the student dentist completed my examination she informed me that she'd bring in a faculty member (any one that she could find that was free) so they could examine me and determine whether or not they agreed with her course of action.


My student dentist is a young Nigerian woman. The faculty member she found is a Black woman of about 50. The DDS lowered my chair, and reclined the back, so now I was practically lying flat on my back. She examined my tooth in question and the rest of my teeth -- commenting that I have nice teeth and I obviously take care of them -- and agreed with the student dentist's findings and treatment plan and signed off on it.

Watch the video after the break~

A Random Moment with Maya Azucena

A few years ago, she was the feature performer at Symponics Live at Bowery Poetry Club. I was moved enough by her music to chat with her after the show. I fell in love with her music because it is emotionally charged. I love her stage presence and, of course, her hair. When I attended a later show; she remembered me, always had a warm, welcoming energy.  Last week between a recording session and before her guest DJ gig at the Nu Hotel she sat down with me for this interview.

Hi, I’m Maya Azucena, I am from Brooklyn, New York—that always comes immediately after every description of myself—I am an artist, a humanitarian and an entrepreneur. Business woman, basically.

Do you blend a lot of your humanitarian work into your music? Is that the message behind your music?

My social activism work is extremely integrated into my music. I think it all started with feeling that my songwriting was a way that I could help people. I have very strong convictions about injustices in the world and my heart just goes out to those that struggle. I’ve had my own struggles. I think what followed writing songs that had cultural and socially relevant themes was representing those themes at benefit events and branding it in a way where it’s me as an artist meshed with me as a humanitarian.

The Wow Factor of Synchronicity 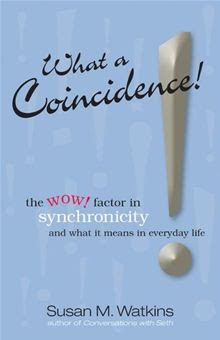 I finished reading What a Coincidence about 10 days ago. I decided to take some time to process it while continuing to notice a lot of synchronicity in my life and the ways my intuition leads me. I take that as a sign that I'm on the right path. Some moments of coincidence and synchronicity are truly "wow" moments. Also like Watkins, solutions are dropped into my lap if I make a definitive statement but don't dwell on it; once an intention is set, the pieces fall into place!


Recent examples of synchronicity and coincidence:

I want to include Faye in my interview series and made a mental note to send her an email about it. The next morning on my way to the dentist, I get off one train and cross the platform to wait for the next one. Seconds later, Faye appears on the platform from behind one of the sets of stairs at the West 4th station! I actually stand in shock for a while then gather myself and go over to say "hello". We chat for a while and it turns out we're both on our way to the dentist!