A Random Moment with Tom Hatton

I met "Sir Hatton" by way of "France". I frequented Les Enfants Terribles, a lot, in 2010. Tom was the gracious bartender with the piercing eyes who wore his Oxfords unbuttoned to the third button. I'd known him as an actor. I learned of his other artistic endeavor, music, when I ran into him at a friend's gig recently. I met up with him the following week before his own gig for this interview. 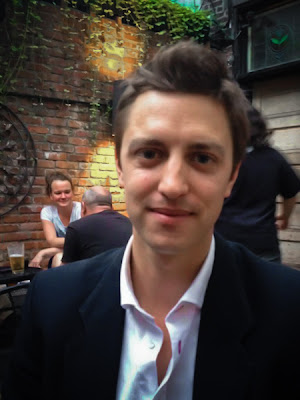 When did you get involved in music?

I’ve been playing casually since I was about 15. But really in terms of performing, I started when I met Nimo – Nimesh Gandhi – we’re close friends so we started playing together and now we’re performing on a fairly regular basis.


When I met you, you were acting. Are you still acting at all?

Do you have a preference of the two or is it a good balance to do both?

It’s a good balance. You know, I think acting is a big area and I like to see myself essentially and that’s what appeals to me with music. You know like writing songs, performing songs that come from myself. Not a character.

Are you involved in the songwriting [for Gandhi]?

Yes. So this the first performance where we’re gonna be previewing some of our co-written songs. The majority of work previously was Nimo’s work but this is more of a collaboration – so yeah, I’m excited about it.

What genre of music would you say you guys play?

I think we can be categorized as Folk Rock. We’re both pretty influenced by the music scene, acoustic guitar scene of the 60’s, 70’s. Really we bring kind of a contemporary vibe. Nimo has that whole, I guess you could say, Indian vibe going on. I bring sort of the Bob Dylan-esque, instrumental vibe and fused together with our drummer, Shawn, it’s a pretty interesting mix.

Do you have any upcoming projects together?

Yeah, it’s about playing more shows, getting in our groove. We love this place, L.I.C. Bar in Long Island City. We also play a local Peruvian bar, Pio Pio Riko. I think the goal really is to get 10 or so songs that we’ve co-written and can really go out there and take to the good people of Brooklyn.

Well, I work in a French bar, weekends, and I just learned a word which is kinda like a comeback to people if they say something in French, it’s de rien. It means “you’re welcome” and it’s not a word that’s used much in the bar. So I just learned how to say that and … you know cause people are always like “Ça va? D’accord” it means “How are you? I’m ok” … De rien really just closes it with a nice way. (laughs)

What is the best advice you’ve given a bar patron?

Leave. Go traveling. See the world. It’s a continental bar so people come with an interest in culture. I think most people are looking for something more than just a whiskey. 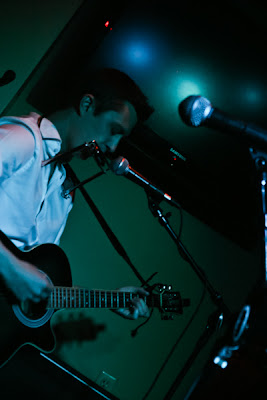 I’m sure you get complimented on your accent a lot. What accent does it for you? What accent makes you swoon?

Before I moved to America, I was totally captivated by the American accent and I think to some extent I still am even though I’ve been here for 6 years.

I think the East Coast American accent really kinda appeals to me. I don’t know, if it that’s specific, to be honest with you. It’s more the way of speaking—the efficiency and kinda the salesmanship that most American people speak with—it’s appealing, it makes you want to talk to them more. Aside from that, I like the South African accent especially in women—there’s a grounded-ness to it and a humor to it as well.

I want you to complete this statement: If my muse were an animal, it would be…

If my muse were an animal, it would be a Siamese cat. I find them very beautiful. I particularly like their eyes and I find eyes attractive. I think the way they move is elegant. Being a feline creature they’re not … they don’t give it all away, you know? I love the mystique about them. I would be inspired to write a song about someone with those qualities.