Age Is Nothing But A Number


The past few days I've felt "subpar" as I like to put it. I wasn't sick, but I could feel something coming on--slight congestion, sneezing, achy body. I know last week wore me down and that left me susceptible to a virus or bacteria. The lack of sleep and close quarters at Book Expo America--it can take a toll on the best of us.


What made me feel better was two great workouts which left me drenched and winded. Today, I still sound a little nasally, but much improved from Saturday. I always feel worse when I don't workout--physically and mentally. It's been a part of my life since high school. Being active is my being.


I'm telling you all this because I want to share one more highlight from Book Expo America. I purposely left this one out because I wanted to do a separate post. May 23, I received a press invite from Guinness World Records for a great interview and photo opportunity with Ernestine Shepherd, the "World's Oldest Female Bodybuilder". I committed one thing that annoys me when others do it (or don't do it)--I didn't read the email all the way through. I saw the words "female" and "bodybuilder" and "oldest" and I was blinded by excitement. I'm a huge advocate of women picking up weights. Strength training improves posture, confidence, raises your resting metabolism, regulates hormones, increases body density, shapes and tones your body and, the obvious, makes women stronger. 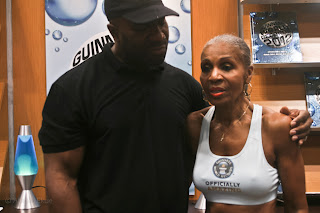 The next morning, I rushed to the Javits Center, navigated through the crowds to Booth #3639 and there she was. I was so pleased to see she was a Black woman (again, I didn't read the entire email) because I've witnessed too much praise for "thick snacks" in our community and it's to our detriment. She was being interviewed by Herman Smalls (pictured above) when I arrived. I stood next to the videographer and started taking photos and taking notes. Ernestine Shepherd looked amazing for 74 and was very soft spoken.


It starts with that first step--Shepherd shared her journey which began with that first step. Then it progressed to a jog, then to a full run. 1 mile, 2 miles now at least 10 miles a day. Maybe one day I'll get into long distance running. I released my camera and let it hang by my hip as I listened to her intently. "You'll feel the difference first. You won't see it right away." And I couldn't agree more. Too many people don't workout because they don't see instant change in their bodies, but it starts in the mind first. "Where there's a will there's a way" as Billy Blanks would say. Shepherd didn't start bodybuilding until she was 56--it's never too late. The human body is very resilient and she's a perfect example of "use it or lose it".

Those are the tenets she trains and lives by. It takes determination, dedication and discipline to change your way of thinking and lifestyle and to constantly push your physical and mental limits. During my depression, the thought of doing anything was frightening. The workouts didn't happen. When I did push through a workout, I ended up injured so that gave me another reason not to do it. Now that my mind is healthy again, my body is bouncing back. Shepherd didn't balk at getting older. She was inactive for most of her life. She was on tons of medications for various ailments. Once she started training with Yohnnie Shambourger, a former Mr. Universe, she no longer needs the medication.


Ernestine Shepherd also has the support of her family. She's been married for over 50 years and her husband prepares all her meals for her. She gets a double high-five for that one. My mother may have complained that I was "jumping down the place" but she never stopped me from working out. Not everyone has a support system but that's where your own determination, dedication and discipline comes in. What's important is that you get up and move.


Ernestine Shepherd turns 75 on June 13. Happy Birthday! I think we have a centenarian in the making~ 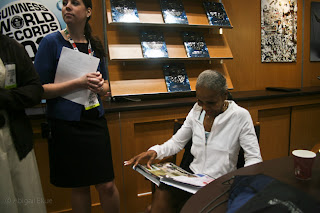 Guinness Book of World Records 2012 will be released on September 13 and be available until December 2011.