That was my reaction when I received an email from Harrison Wise on Wednesday. Billy Blanks would be teaching a kickboxing workout at the dojo Wise attends. A live Tae Bo workout!! Last year, I attended Harrison Wise's Pleasure & Pain Kickboxing Boot Camp class. I'm so grateful he remembered and shared the news with me.


Anyone who's known me for longer than 5 years, knows how much I love Tae Bo and how the workout and Billy Blanks has shaped my outlook on health, fitness and working out. I was a freshman in college when Tae Bo went mainstream. My mother ordered the tapes, but I claimed them for myself. My workouts were comprised of Tae Bo and weights. When the Tae Bo Live! series came out, she ordered the subscription for me -- a new advanced workout every month!


At the same time I was working towards my Sports Sciences degree and Athletic Training certification and was taking courses in Biomechanics & Kinesiology, Exercise Physiology, Principles of Athletic Training, Adapted Physical Education and Sports Psychology, I was also learning from Tae Bo and was applying the body awareness, willpower and positive visualization from one to the other.


I took Karate for a semester (I wanted to take capoeira taught by Edna Lima, but that class was always full), and had a head start because of some of the techniques I'd learned from Tae Bo. I included Tae Bo in Letters to My Former Self and wrote an article, How to Begin Tae Bo. My brother sent me a letter from Basic Training telling me they had the Privates do Tae Bo as part of their training. I later bought Tae Bo Bootcamp DVDs and duck walked all around my living room. Now I need to buy the PT 24/7 workout -- he was promoting it during his trip to New York on Good Morning America, The Wendy Williams Show and The View.


On Saturday, I left home with an hour to spare, just so I'd be on-time. Maybe it was the excitement, maybe it was the rain, but I ended up on the bus going in the wrong direction! I didn't realize it until the bus reached the last stop and had to turn back around! Ugh. And that was the first bus; I still had to transfer to another bus. I took it all in stride.


The class was held at Crosson's International Martial Arts & Fitness Center owned by Grand Master Robert Crosson, a longtime friend of Billy Blanks. After the workout, he told us that Blanks called him a few days prior saying he'd be in NY and wanted to stop by the dojo and give a class -- 2 people or 200 people -- didn't matter how many showed up, Blanks said he'd be there. It was short notice and Grand Master Crosson wasn't sure how he'd get the word out.


Well, he got the word out.


I also told a few of my friends that I thought would be interested. Many wanted to attend but already had previous engagements. Saturday was a rainy morning. Would I get one-on-one attention from Billy Blanks? A girl can dream.


What controls your core?


There he was, Billy Blanks. His energy was so familiar. I watched the class from the other side of the window in the dojo as he discussed the importance of your core while throwing punches. They'd already began and thinking back to my days of working in fitness centers, once a class has started, you don't enter.  I was disappointed that I wasn't in there throwing my left jabs and right crosses with everyone else, but I was there nonetheless.


No spectators, only participators


A pleasant gentleman exited the dojo to the area I was standing. He asked why I wasn't in the studio. I explained I thought it was too late. "No, they just started. Get in there." He was Grand Master Crosson. He said I was standing out there looking sad. I've never been good at hiding my feelings.  I took off my sneakers & socks and stripped down to my workout clothes before following him into the dojo.


I want to be in a Tae Bo video. Always have. I'd envision myself in the front row with Shellie, Michelle, Irene and Debbie (Team Tae Bo!) counting forward and backwards from 1 to 8 while Billy encourages me to "dig deep" and "show him what I got". I found a spot in the back of the room and  joined in with knee strikes. I foresaw disaster as he instructed us on roundhouse kicks. We were packed pretty tightly in the back row and I was standing next to a tall man with very long legs. I spotted a space at the front of the class and I snagged it.


I haven't gotten back to regular Tae Bo workouts since my depression and fractured ankle. Every once in a while I'd crave it or need to relieve some stress, get 2 strong weeks in and then it would fade and I'd focus solely on weights and yoga, or I'd tweak my ankle. That time off became apparent on Saturday in the dojo. I was sucking wind and got a stitch (one of my earrings fell out) but it all felt great! Once I counted, focused on my breath and my form, I was good. It all came flooding back to me.


Billy Blanks even held the pads for me! More than once. That is a huge deal for me.

The day before, I did a workout that included a lot of "butt work". The same butt work I learned from Tae Bo many years before. I used to have my clients do those exercises when they'd request "an ass like mine" and I once put two other trainers at the gym through a series of 8 exercises from Blanks' "butt work" -- burns so good. On Saturday, there I was doing "butt work" with Billy Blanks. 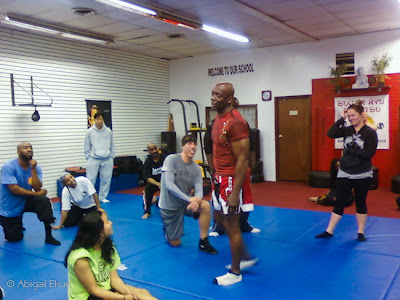 Shyness is a prison.


That was one of the messages Billy Blanks shared with us at the end of the class. He told us to "come closer"; we gathered around and there we sat having a conversation with him about goals, stress and life. He's very positive and his message speaks to people of any faith. Beaming, I sent my friend a text saying people and moments like that are what excite and inspire me -- self-made man, athletic, making a living doing what he loves, positive and humble. Blanks didn't allow his environment define him. He's human and has his moments of self-doubt just like the rest of us. Speaking the negative brings the negative. He posed the scenario to us, as we make progress in Tae Bo, our weight loss, fitness, any life goals, we can always decide to go back to the person we were, to "sit on the couch" or to keep moving forward.


~ What's the definition of "sub"? Under. Yet many of us are controlled by our subconscious and not our conscious.


~ The battle is overcoming our senses -- sight, hearing, taste, touch, smell -- these wants can lead to regret if we give in to them.


~ It's very important to be mindful of the energy you project and it all starts with your body language. Your body reveals your personality before you ever say a word.


~ Life wants to knock you down everyday, but it's up to you to fight and remain focused on your dreams. Circumstances and deception will have to be dealt with but it's important to never take your eyes off your goal.


~ Most people are followers and the hardest thing for someone to develop is belief.


Blanks and Crosson also shared stories about when they first met and competitions they won including the '85 World Championship in Trinidad. Crosson later showed me that very trophy in the front window of the dojo.

That's what Billy Blanks said to me as I approached him to shake his hand. I told him my moves were all his doing -- I learned those techniques from him. He asked if we worked out together in the past and said I looked very familiar. Personal highlight of the afternoon! To be given the opportunity to workout with him again? Priceless.


As I type this, my lats, pecs, abs and hip flexors are sore. But I'm happy.


Billy Blanks said if he touched just one person in that dojo that afternoon, he's done his job. Job well done, Billy.