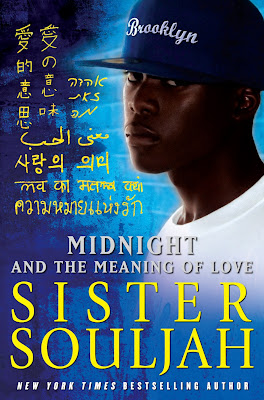 Once again, Random Musings has been selected to be an exclusive blog partner for the Atria Books Literary Salon Series. This month's Salon will feature an interview with Sister Souljah. She will be discussing her new novel, Midnight and the Meaning of Love, which was released on April 12. The interview will be moderated by Jada Pinkett Smith.


I'm very excited that I was selected to partner with Atria Books again. I read Sister Souljah's The Coldest Winter Ever back in college. That, Push by Sapphire and the film Memento were huge influences on a screenplay I wrote in 2002, Ebony, New York.

We meet a 24 year old Ebony Jones as she walks through the Village. She bumps into herself at age 17 right after she has a near fatal accident with her infant son, Jabari Smalls. We flashback to her life pre-motherhood with Tariq Miller, Jabari's deadbeat father and Tyrone Smalls. She resists the changes in her life while pregnant and continues to party like she used to with best friend, Shameeka Andrews. After Jabari is born, we witness Ebony's struggle with new motherhood, dead end and dangerous jobs, her relationship with her mother, Loretta Martin, contentious relationship with Tariq Miller and the "good guy", Eric Robinson, who's trying in vain to "get with" Ebony. It's a coming-of-age movie full of betrayal, hope, and realism.


Reading through it, I cringed at some of the language--Ebonics abound. But that was necessary for the story. It also reads like a period piece now (people still had landlines and flip phones and Escalades were the "hot shit" at the moment.)

Here are two scenes from the script between Ebony and her mother (forgive the formatting):


INT. APARTMENT – NIGHT
Ebony is in the b.g., in the kitchen, washing dishes. Her belly is much bigger. In the f.g. is LORETTA MARTIN, Ebony’s mother, in the living room.
Ebony is done washing dishes.
EBONY
Mama, you need anything?
LORETTA
No.
EBONY
Why you acting so funny?
LORETTA
How am I acting funny? You asked if
I wanted some food. I said no.
EBONY
But you don’t ever seem to eat when
I'm around no more.
LORETTA
You want me eating all your food? You
gotta eat for two now.
EBONY
Mama, you said you ain’t have no
problem with me being pregnant.
LORETTA
You shouldn’t be pregnant.
EBONY
(mumbling)
Atleast I ain’t have no abortion.
LORETTA
What did you say?
EBONY
Nothing.
Ebony looks at her mother.
EBONY (V.O.)
But I guess I knew why she trippin’. She
didn’t want her daughter doin’ the same
shit she did. She had me pretty young too.
I coulda had big brothers and sisters, but the doctor told her if she had anymore abortions, she may not be able to get no
kids at all. So when she got pregnant with me, she kept me.
Ebony makes herself a heaping plate of food.
EBONY (V.O.)
I been eating like a fucking pig. Anything
you put in front of me, I’ll eat. You know your mama tell you not to waste no food
cause they’s hungry kids in ? Well
that ain’t never made no sense to me, but
I guess those kids in  happy now. My baby be begging for some crazy shit.
Ebony goes and sits the living room with her plate and her drink.
What is that on your plate?
EBONY
I got some macaroni and cheese, some
rice, some pork and beans, chicken wings, and I took that leftover Chinese food
that was in the fridge.
just shakes her head.
LORETTA
You know that baby’s gonna come out looking
like a fucking chicken, you keep eating
like that.
EBONY
Mama!
Her mother looks back at the TV. Ebony picks up a spoonful of rice. She puts it down.
EBONY
You think my baby gonna come out funny
if I eat like this? I don’t want no
retarded baby. I’m sorry. I see those
babies and I don’t want one.
Loretta takes a deep breath before looking at Ebony.
LORETTA
Your baby won’t be retarded.
Ebony nods.
LORETTA
Where your greens? Go put some greens
on that plate.
Ebony gets up and walks back toward the kitchen.
EBONY (V.O.)
I knew my mama still cared.
-----------
INT. APARTMENT – NIGHT
Loretta is throwing clothes at Ebony.
LORETTA
Take all your shit and get out my
fucking house!
EBONY
Mama, why you flippin’?
LORETTA
I’m sick of taking care of your baby!
He crawling around breaking all my
things, while you out there shaking
your ass for people!
Ebony is picking up some of the clothes Loretta is throwing at her.
EBONY
Mama! Where am I supposed to go? I got
Jabari now. You gonna put me out?
LORETTA
Call your baby daddy! Shit! You fucked
him! Let him pay now! He always calling
here wanting to see Jabari anyway…! You
ever opened any of his letters?
EBONY
I got like five letters from Tariq and
I never did open any of them!
Jabari starts to cry in the b.g.
Loretta walks over to the table and hands Ebony a piece of paper.
EBONY
A check for five hundred dollars…
LORETTA
Yeah, that’s right! He sent one every
month since Jabari been born! You been throwin’ money away like a fool!
Ebony walks over to Jabari and picks him out of his playpen.
EBONY
He ain't gonna buy his way back
into my life! Or Jabari’s!
(V.O.)
But Mama right, I need the money…
QUICK FLASH – Manager of strip club is counting off hundred dollar bills and giving them to Ebony.
EBONY (V.O.)
Maybe not as bad as I used to…
LORETTA
Why you standing there staring like
a fool?
EBONY
He tell you where he get this money
from?
LORETTA
No. And it don’t matter. You got the money
now. Use it for some good.
EBONY
He prob’ly dealing again. What the fuck I
want his drug money for? He trying to
buy his son. Too late. “Smalls” is already
on the birth certificate.
Loretta walks up to Ebony and strokes her cheek.
LORETTA
Girl, don’t be a fool. You don’t
need to be dancing for no money.
Jabari starts to quiet down.
EBONY
Mama, me and Jabari gonna be just fine.
She walks back to the pile of clothes. She puts Jabari on the floor. She starts to fold some clothes.
EBONY
I’ll be gone by the morning.
-----------
Ebony, New York was requested by Senza Pictures and Special Ops Media when I first wrote it. Soon after, life threw a curve and I lost track. I entered 2011 gung-ho about finishing Letters to My Former Self and getting back into my screenwriting. Looking through my old emails, is definitely lighting a fire...