Lessons For The Socially Awkward 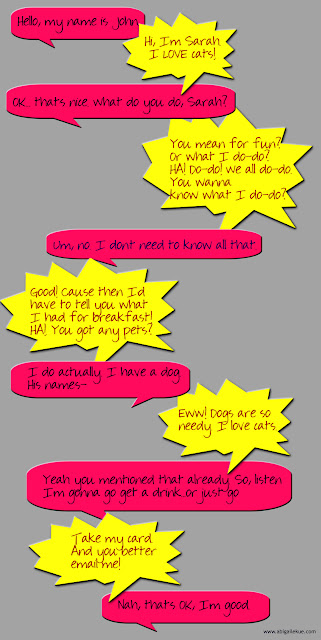 I've had more than one friend tell me I should teach classes or seminars on flirting, or just simply talking to new people. When I envision these classes, I see "hands-on" workshops, with lots of field trips to bars, networking events, the park, supermarket and I'd give my students assignments; collect one phone number, have at least an 6 minute conversation with 3 strangers (3 minute convos for beginners or intermediates), make a date or plans to meet someone, bring up your pet turtle or your last workout, naturally, in conversation et cetera, et cetera.


I witness a lot of social awkwardness when I go out. BB's and iPhones aren't helping matters either (On my personal list of conversation-killers: smart (cell) phones. If we're speaking and you decide to text or tweet, I will walk away). I shook my head in sympathy for Ann of Parks and Recreation when I watched the episode, "Fancy Party". She just had no clue.

I wonder if flirting or simply "interacting" is something that can be taught. Are some people hopeless when it comes to talking to other people? If you don't learn these skills in college or your twenties are you doomed to awkward exchanges? Are we programmed to not be able to reach out to others because of the "stranger danger" we were taught as children? You don't have to be smooth or woo every one you come in contact with but I've met some people who can't handle a "hello". That's when I jump in with my questions...


Learn to listen. After the initial greeting and the what-do-you-do's, let the other person lead the conversation, if necessary. However, there are people who feel they have to fill every silence with their voice. When you listen, you can usually find something to talk about.


Play up your socially awkward charms, to a degree. Constant self-deprecation is not cute. But if you admit you're a little nervous, or shy, others will work with you. And if the other person is nervous too? There, you've found yourself something to talk about. If they're the more socially refined type, you might learn something from them. Ask them, "How do you do it?" And then follow the previous rule. If you were busy thinking about what you were going to say next while the other person was talking or being entertained by the voices in your head (read: not listening) and  forgot someone's name, ask them their name again. Admit you forgot, that you're meeting so many people at said event and it's hard to remember everyone's name. No shame in that.


Avoid excessive amounts of alcohol. You may think it loosens you up, but it only amplifies your awkward behavior. "Whoo! I'm tipsy (or drunk) and now I can talk to people!" Yeah, but you're more likely to invade someone else's personal space and behave awkwardly on a bigger (louder) scale. If you're caught in this situation with a drunk awkward, the ability to end a conversation comes in handy. Why suffer? If you don't want to talk to someone, if they're rude, boring you to tears, are a close talker, it's totally within your right to walk away.


When all else fails, dance like this. You're sure to get people talking and relieve some stress.