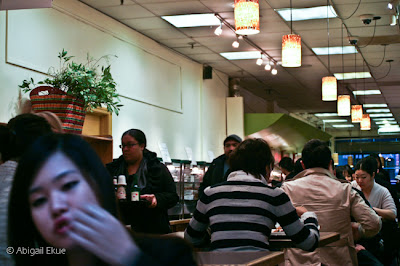 Keeping in line with my Reboot and priming for travel...

A long-time friend took me out for Korean last week. She took me to one (of two) of her favorite spots. Ok, first, I think that's a great honor when someone takes you their favorite place.

I should also tell you that I'll be all over the place in this post.

So we met at Kunjip and did a lot of catching up over pipping hot stone bowls of bibimbap and steamed eggs, radishes, dried fish, miso soup... I should've taken a photo of the spread, because I can't remember what else was served. I had the camera in my bag, by the way.

The windows of the restaurant were covered with flyers and posters but from where I was sitting, I could see through one of the spaces to the street outside. I did a double take. Is that the Eiffel Tower? Does that say 'Paris'?


Yes and yes. It was a large neon sign for a French bakery/coffee shop, right in the middle of Koreatown.


I told my friend about my art that's already in Paris, my (hopefully future) Parisian lover, and the lunch date that primed me for travel.


My friend and I continued to catch up on work, writing, relationships, life. She had a copy of The Period Project: An Anthology on Menstruation with her--she has an essay published in the book. We discussed the book and our future published works.


Darting across 32nd Street to Woorjip for drinks, I thought, "this is why I'm friends with her. She's open to different cultures and I'm constantly learning something from her". I later blurted that out to her while we took our seats at a table at the back of the establishment. 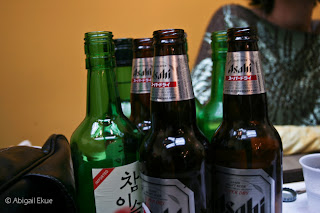 
Her friend, a poet/artist, ended up coming to Woorjip for dinner and joined us at the table.


It was one of those adult evenings. We discussed all sorts of topics. Three things stood out:


Both women wondered why I wasn't in Nigeria when they found out that I most certainly could be. Each expressed interest in visiting Nigeria.


She gave both my friend and I postcards to use as writing prompts. My work is very character-driven.  I instantly had a story in my head when I looked at the postcard she gave my friend. There were drawings of people on it. I could instantly see their 'character'. One woman in the middle of the bottom row on the postcard would've been who I choose to write about. My postcard has flowers on it. That will be a challenge to get a story from that. I was also encouraged by both of them to apply to writing intensives and retreats, including VONA and the Summer Writers Lab at  LIU (my alma mater). My friend attended VONA last year and ending up meeting another good friend of mine who one of my characters in Letters to My Former Self is based on. Connect.

"I could see you dating an Italian," she said when I was recounting the sordid tale of my ex, his girlfriends and the Italian I was dating at the time. I perked up. My friend mentioned I've been on a "French kick" lately and she agreed she could see me with a Frenchman as well. I think it's great that she just met me and sensed that. I had a great Twitter exchange with @ConcretePearl that began when I tweeted: Where are the men who think women like me are their "type"? It lead to a discussion of love and travel. What stuck out the most was when ConcretePearl wrote: ...love and travel are completely and utterly synonymous. That really hit me. Maybe my love is out "there". ConcretePearl also happens to be heading to the Cannes Film Festival as part of the Creative Minds In Cannes due to her short film of the same name. My other friend, the lunch date, will be working Cannes. Connect. (I can't wait to see Midnight in Paris -- Woody Allen, Owen Wilson, Adrien Brody and Paris!)


A friend of my friend's friend joined us. Later, we struck up conversation with the group at the next table. Countless sips of soju and plum wine... I totally forgot to ask my brother if he has any soju-related stories from his time in Korea.

Aight, I think I've connected all the dots.