On Shane McMahon vs The Undertaker, Brock Lesnar and Wrestlemania 32 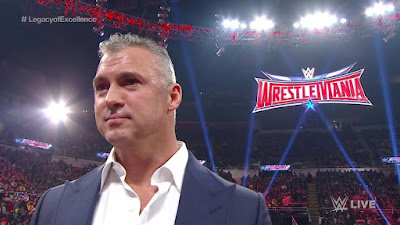 I haven't agreed with much of what WWE Creative has done recently. I've also seen what was coming a mile away and hoped and prayed to be surprised like I was when I was kid. Perhaps I'll never feel that way again. But I do enjoy when I see something develop that makes me nod by head out of respect  with the understanding that it's good for business (Seth Rollins vs AJ Styles will be epic).


Shane McMahon vs The Undertaker

When Vince McMahon awarded the Vincent J. McMahon Legacy of Excellence Award to Stephanie I was all meh to the whole situation.


It was great to see Shane McMahon on WWE television again! I love the blurred line between kayfabe and shoot when he mentioned suffering Raw ratings, plummeting stock and roster injuries. I don't think I'm the only one who is suffering from Authority fatigue and Shane is a breath of fresh air... if he wins control/ownership of Raw (WWE). Having The Undertaker as his opponent works because it brings more real life and storyline together.


Although The Undertaker's streak is no longer on the line, the stakes are still high for this match. It's no secret that The Undertaker is very influential in the WWE locker room. He has his hand in what direction the company goes when it comes to who they put the belt on, who gets pushed, buried etc. So I think it's a good angle to put the control of the company, the future of the WWE in The Undertaker's hands against the owner's son, in The Undertaker's match, Hell in a Cell.


It's also a great opportunity for one last run, but for the sake of story and an unforgettable screwjob, The Undertaker could get into Hell in a Cell, proclaim it's his yard and lay down, giving the yard to Shane McMahon.


It could go either way.

Not to mention if both men are healthy (enough) it should be fun to watch (think Kurt Angle vs Shane McMahon or Shane against HBK or the Wrestlemania 17 McMahon battle). I smell a highlight-reel worthy Shane-O-Mac spot in the making.

We all saw it coming as soon as they released the video of Brock Lesnar attacking Dean Ambrose followed by Ambrose being carted off via ambulance. Dean Ambrose would make a crippled triumphant return to the arena at some point during the evening.


What I would have preferred to see is Dean Ambrose not at Raw at all. We'd get results throughout the evening about his condition. During Raw, Brock Lesnar would attack, no destroy Roman Reigns thereby leaving him as the only viable opponent for Triple H at Wrestlemania, which is what he wants. The fans can't get enough of Suplex City. A physical confrontation with HHH to close out Raw would set up that possible Wrestlemania match. No matter who ends up facing Triple H for the title, we need to see him in the ring or "involved" a bit more. And that's what we got at the end of last night's Raw!

They have 41 days to make us care about this Wrestlemania 32 main event. They're off to a good start. If he's the WWE champion, defending the title, you gotta fight. For too long, they've put the championship on someone who doesn't defend it. Plus there's still a chance to make Scott Hall's main event a reality... right? RIGHT? Either way, I think Reigns still needs to be in the ring with someone more seasoned in order to get the best out of him. Triple H is the best man for the job.


At Wrestlemania 32, we'll see Brock and Ambrose in a street fight. And I'm looking forward to it because it's going to be smashmouth and insane. Brock can't lose that fight. Yes, Ambrose will give Cole and JBL lots of opportunities to tell us how much of "lunatic" he is and how he "will never quit" and "won't stay down" but in the end he's gotta lose this one. Give us a little bit of realism, won't you WWE? Unless there's a "career-ending" bump they've got planned for us... 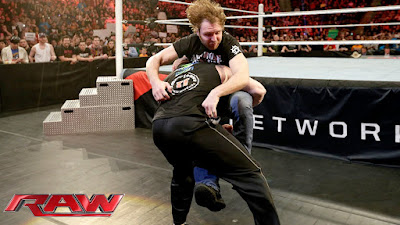 For the last few years, the Monday Night Raw to air the day after the February PPV (going back to the days when it was No Way Out) has always been a good one, it's set the tone for Wrestlemania, tied up loose ends to storylines or introduced new ones so that we'd care about Wrestlemania matches. February 22nd's Raw did that.