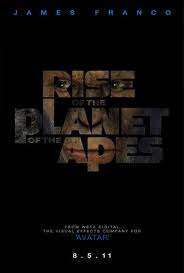 We all gathered around the laptop to watch the trailer. I had viewed it a few days prior and was equally creeped out and impressed. Actually, the fact that I was creeped out is what impressed me. Rise of the Planet of the Apes is a movie I'd go to the theaters to watch "for the cinematic value" as a fellow trailer-watcher put it. Sucks I have to wait until August 5.

At the end of the trailer, we all started clamoring to get our two cents in.

One guest at the dinner party said at the end of the trailer, he was expecting the chimp to talk. Yes! Andy Serkis is at it again!


The scene that stuck with me most is of a chimp standing at the foot of a bed while a couple sleeps. What the hell is he going to do? Chimps are so strong. And they have a dark side just like humans. I witnessed this when I watched The Dark Side of Chimps on National Geographic a few years ago. They wage wars and murder just like humans. Could increased brain capacity make them evil masterminds?

They are very human. And if they talk, it would allow us to understand them better. The silence adds to the unpredictability. When something is unpredictable, we (humans) aren't in control. We don't like that. But chimps and apes not speaking makes the scenarios in Rise of the Planet of the Apes more realistic.


I didn't mind the talking chimps and apes in Planet of the Apes (2001) but in comparison, the film was campy. Remember when they hinted at a love affair between Walhberg's character and one of the apes? Yeah, I rolled my eyes a bit too.


There are gorillas in this movie as well. They are gentle giants until provoked. They look provoked in the trailer.


I watched Clash of the Titans (2010) last night. The instant I saw the Pegasus, I thought about Ancient Aliens and the theory that Pegasus, Centaur, Minotaur, Griffin etc were all products of genetic testing or breeding that went awry (I swear, that show has really made a mark on me). I wouldn't be surprised if Rise, its premise, is studied and dissected in philosophy and history classes on college campuses. It's an extension of gene therapy, stem cell research, cloning. There are those that are for it, those that are against it. And we won't know what will happen until it happens.


So yeah, I'm looking forward to that movie. Maybe I'll make that my one movie date of the year.

Rise Of The Planet Of The Apes - Teaser Site

Email ThisBlogThis!Share to TwitterShare to FacebookShare to Pinterest
Labels: Ancient Aliens, Andy Serkis, chimps, Doctor Zaius, humans, inspiration, movies, National Geographic, Planet of the Apes, Rise of the Planet of the Apes, The Dark Side of Chimps, writing