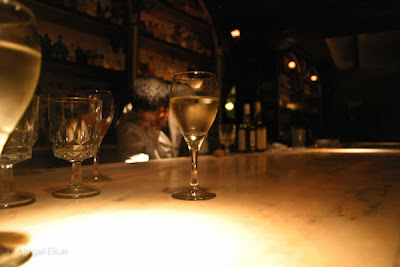 The following took place between 10:30PM Wednesday and 4:00AM Thursday


Following a relationship & race forum event, Geraldine* and I stood on Allen St deciding what to do next. Nah, let me rephrase that, we stood on Allen St deciding where to get drinks. I knew I wouldn't be able to drink without eating first. I had a great workout a few hours earlier and my metabolism was still revved up. We pregamed with pizza and water on Houston St.


Afterwards we walked to Chinatown to Apothéke. I hadn't been in that part of Chinatown since the Chinese New Year. I first learned of Apothéke on The Real Housewives of New York City. My interest was piqued when LuAnn walked there with her date, it was an out-of-the-way sort of place. The streets didn't look like they were in NY; I like places off the beaten track. The theme of the bar intrigued me as well--an apothecary. So when my friend told me he was working there I was very excited and admitted my RHONY viewing habits. 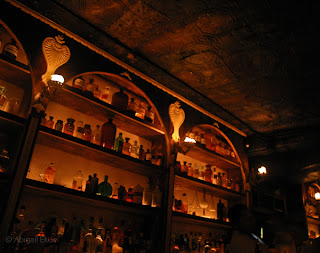 We took a spot at the end of the bar close to the speakers. The bartenders were decked out in their lab coats dispensing elixirs. My friend slid the menu over to us. Need something for health & beauty? A stimulant, stress reliever, a pain killer or an aphrodisiac? I looked for something containing vodka and had the Dr. Ruth (rosemary infused vodka, fresh strawberries, lime, topped with rose champagne).


Geraldine's theme of the night: Funky. And the funky drinks tasted great! As the night went on we drank, Lychee Three Ways, Sparkling Star, Cilantro Paso, Jasmine Sour and Geraldine ordered a drink with wasabi. Whatever it was, it was Fun-kee. I had my eye on Madagascan Vanilla Sidecar, but it has Cognac and I didn't want to mix. Absinthe is also on the menu at Apotheke. I've never had any but there are only two men I'd drink it with, one being my brother, both for trust reason. We also sampled a Vintage Margarita--pure tequila and Na+. 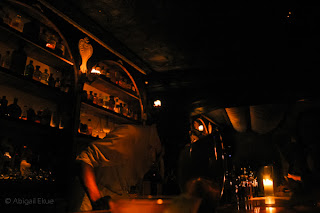 Geraldine and I talked about writing, feminism, academia, men, future travel plans and future men. In spite of RHONY, I still want to go to Morocco. I have three friends lined up, Geraldine included. At one point, I looked past Geraldine and saw Aziz Ansari ordering a drink. We let him be. What did tickle us was the guy who tried to name-drop with Ansari and totally butchered Zach Galifianakis' name. We felt the effects after our first drink. The medicinal properties, perhaps? Or the people responsible for the drinks? Are they pharmacists? Are they chemists? Are they liquid chefs? Are they magicians? Let's just say we forgot for a while that it was Wednesday night. 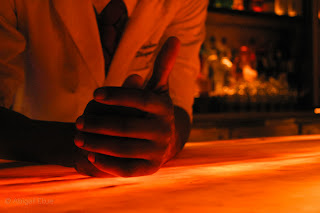 Tim, the DJ, added to the time lapse. I gave him points for playing a remix of Marlena Shaw's "California Soul" earlier in the evening. Marvin Gaye told us we "Gotta Give It Up". We were impressed with his song list. I struck up a conversation. Got info about his band, The Golden Pony. He asked what I was shooting on my camera. I told if he needed some photos of his band, some performance shots, I got him. Damn these DJs and their cuteness.


Last call was upon us. Geraldine and I didn't budge. We mingled with the bartenders and the bouncer and literally closed the place down. One bartender told us that management is opening a new establishment next door, Pulqueria, which will have a Mexican theme. I'll have to check it out, I've never had pulque. Then I can compare it to pulque on a trip to Mexico. 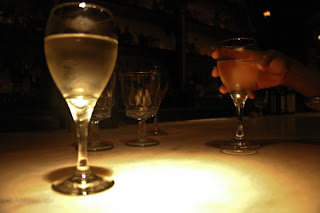 I broke the seal earlier in the evening. That sealed my fate. I perched myself on the edge of the bench at the Grand St station watching two uptown trains mosey on by. I managed to still smile at the man who joined myself and the Chinese mother and daughter who were sitting at the other end of the bench. Pressure built in my bladder. I didn't care about the view of the NY skyline as we went over the bridge. I decided to hop off the train at Dekalb Ave to wait for my other train.


You know how you can just tell you're gonna be waiting for a long time? Sure enough, I paced for about 10 minutes plotting how I could piss in the tracks without anyone seeing me. I knew I'd lower my jeans and panties to my knees, and I'd have to make sure my hips were lower than my knees and angle my urethra just right so I wouldn't get any on my pants. Still no train. I had to piss. I didn't have an unlimited metrocard but it'd be worth the $2.25 to pee, anywhere.


I went to McDonald's. I ordered a small chicken nuggets and fries. "Can I use the restroom?" I asked the cashier.

"You wanna cancel this?" she asked pointing the register.

"No, I'll still take that." Let's not forget I was still fueled by alcohol. I shoved the chicken and fries in my bag as I walked down the block to 7-Eleven. "Can I use your restroom?"

"I don't care if it's not clean. I gotta piss. I ain't gonna make it home like this."

An MTA worker standing next to me "felt for me". "Try McDonald's."

"I just came from there, they told me it wasn't working."

"Aww man, everyone's gonna tell you that at this time. Try the train station. Ask the people in the booth for the key."

I let out a deep breath. But not too deep that I'd relax some very important muscles.


The two women in the booth insisted they weren't going to open the restroom until 5AM. After I burned the image of their faces into my mind, I went back to pacing. I thought about perching myself onto of the trash can to eliminate. Then I thought about going down the block to LIU. Plead with the security guard that I was an alum and just needed to use the bathroom. I know where they are. I wouldn't have to go far on campus. An MTA track worker asked me why I was pacing. "I have to piss!"


A train finally pulled into the station. I took a seat and clenched my levator ani so tight I almost gave myself an orgasm from the pressure. At some point does a bladder burst? Would my external sphincter succumb to fatigue? I looked at the internal train car doors; I could take a piss between the cars, I got good balance.

"Is it me or are the trains really slow tonight?" The man sitting to my left, on the other side of the doors, asked me.

I nodded. "I waited forever for this train," my eyebrows raised.

"Oh, I thought it was just the trains I was on," he said.

Nope that train sure was crawling. So I began to make peace with the fact that I would probably lose all control and go in my pants. It was dark, it was late, no one would notice the stain on my jeans, I'd take a shower when I got home anyway so...

Each step jostled my bladder contents. I couldn't move too fast, but had to move fast. Of course the walk home had never been longer and the feeling of a toilet seat cradling my backside never felt so good.

*name has been changed to protect the intellectual