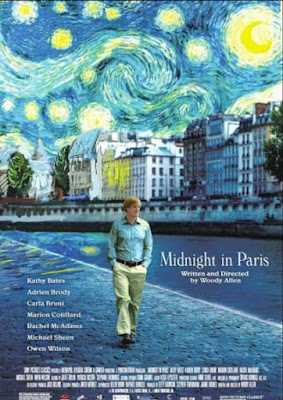 Yesterday, a rainy evening in New York, I walked through SoHo and thought, "Something happens to people in the rain." Everyone's pace was hurried but slowed at the same time. Although I'd planned on going to the movies anyway, the rain made for a good "excuse" to go. I promised myself I wouldn't romanticize the evening, but I will never forget where I was and who I was with when I saw Midnight in Paris.


Last year, I watched Paris: The Luminous Years on PBS. I remember wishing I was in Paris during the 1920's too. It was saturated with with so many artists. They communed, inspired one another, competed. While watched The Luminous Years, I compared Guillaume Apollinaire, Gertrude Stein and Salvador Dalí to people in my own life. That documentary came to life as I watched Owen Wilson (Gil) explore Paris (I thought about how Wilson found himself in another movie with historical characters a la Shanghai Noon and Shanghai Knights. I can't tell you the number of times I've watched those movies. Plus, I have an equally big crush on Jackie Chan). I even developed a hard-on for Hemingway but later I saw him drunk and my clit went soft.


As a writer, I feel it necessary to have seen Midnight in Paris. One of the messages I received is it's important to surround yourself with people who support your work. They don't have to like it, but understand your passion for your work and be honest in their critique of it. I waited for Gil to "catch up" and learn this lesson. What impression would Anaïs Nin have of my erotica and journals? The script to Midnight in Paris is yet another spark for me to return to screenwriting.


I miss Old New York. I think we all yearn for nostalgia at times. We all envy past generations. We consider them the "lucky ones" for having lived during a particular era. There's no time like the present. Or every time is like the present.

If you've seen Midnight in Paris, I'd love to know your thoughts!