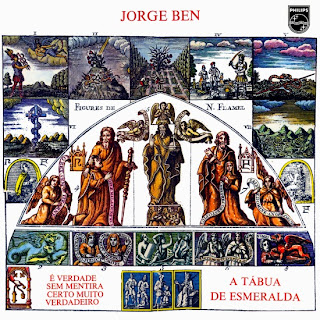 You like what you like. Sometimes you can't explain why you're drawn to someone, a particular show/movie, song; you just are.


A few months ago I opened Jorge Ben Jor's discography in my iTunes and let it play in the background as I worked. I already had quite a few of his songs with 5-star ratings, I workout to some, I want to do a burlesque routine to one and I've used them in some of my mixes and playlists. Now I wanted to hear everything. "Zumbi" (A Tábua De Esmeralda, 1974) struck me.


Zumbi / A Tábua de Esmeralda / Jorge Ben
"What song is this?" I wondered. It made me move unconsciously and when I listen to the layers at the end of the song I feel surrounded. It has the energy of a rally song--every time I play it I put the volume up. I have a visceral response to that song. The crescendo of the song represents all coming together. I wish the song would go on forever (or at least 2 more minutes!) Although it's in Portuguese I started learning the words. I sang along with the chorus and I knew the word "Angola" was in the song. And "Nina" and "Congo". But what exactly was I singing? 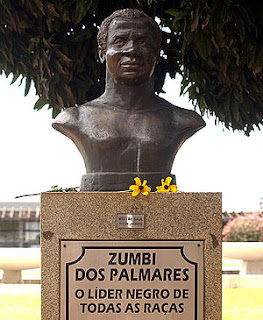 I researched the lyrics and learned the meaning of the song as well. Turns out Zumbi (which always makes me think of Fela Ransome-Kuti when I say the name) was the leader of a runaway slave colony, Quilombo dos Palmares, in Alagoas, Brazil. Zumbi was born a free man but then captured and sold into slavery. He escaped for 15 years was the military leader of the colony until an attack by the Portuguese military. He still evaded capture for 2 years after the colony fell until November 20, 1695. He was beheaded and his head was displayed as a warning to all other slaves. November 20 is still recognized in Brazil as a day of remembrance and celebration of Zumbi and Afro-Brazilian history.


A really good friend calls me a rebel rouser. Always. I've always known if I were alive during slavery, I would've escaped, led some sort of slave revolt, or I never would have been captured. They'd never catch me or someone would die trying.
After reading the story behind this song, I feel Jorge Ben's even more of a kindred spirit. I love his sound; he acknowledges his African heritage in his music. I learned that a majority of the Jorge Ben's songs that I like are esoteric. I'll research the meanings of those as well. I wonder what other part of me he's singing to...


What are your favorite Jorge Ben songs?