Break On Through To The Other Side 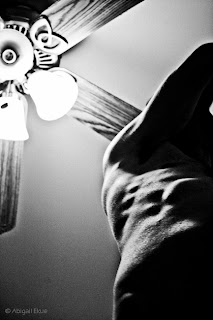 I started nude modeling in 2006. Great experiences, some a bit wacky, luckily none scary or dangerous. Now I’m on the other side of the lens. I shot my first art nude model last Wednesday night. I got the (paid) gig through Craigslist. That’s actually where I got my first modeling gig as well. That photo shoot was paid too and resulted in one of my favorite shots wearing a fishnet dress.

From being a model, I know the importance of building a rapport between model and photographer. Everyone should be comfortable. During my photo shoots I was always comfortable with the photographers. I even became friends with some of them. All of that leads to great art. You have to be pretty comfortable with someone to let them capture images of you (possibly) spread eagle or in awkward positions. There has to be an ease where you may even forget the photographer is there and they capture you looking like you’re “having difficulties” (see below). 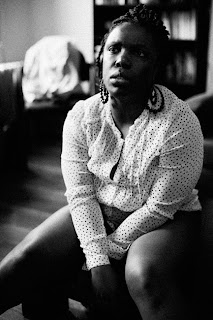 When setting up a shoot, the photographer also has to be sensitive to what the model will and won’t do and how they use the photos afterwards. I’ve signed model releases with some photographers but not with all. So far, I haven’t had any issue with leaks. The photos that I knew would be displayed or published; I’m more than happy with. Oh snap! I just remembered one of the photographers I worked with, Lou Benjamin, wrote a book, The Naked and the Lens. He sent me a copy because I’m featured in the book. I’ll have to remember to reference that book when necessary.
The model I worked with and I exchanged a few emails and texts bouncing ideas off one another for about a day before we decided to shoot. He was hiring a photographer to take some images that would then be sent to an artist in so she could do paintings based on the images of the male form. The catch? He was looking for a feminist photographer – a photographer that would take a feminist approach to the male nude. I interpreted that to mean a male model in poses similar to those we’ve seen female models in or to capture him in a way women would like to view a man. I also had the opportunity to shoot some art nude photos for my own portfolio.
I’ve made a return to my Learning Curve of sorts. As I went through the photos after the shoot, I was aware of what I should’ve done differently. They’re not bloopers, per se, but for the sake of this blog, we’ll call them bloopers.
My model was “just a regular guy” who wanted to do some art modeling. He was great at taking direction and sharing any ideas he had. He also could hold a pose a long time when needed. He even asked at one point if he needed to fluff. Not the kinda shoot. I’ll get there. But there was an ease there which was great. It’s very important to notice when a slight adjustment of a model’s body will improve a photo. In this image, I should’ve asked him to make a fist so those fingers weren’t sticking out like an three-tiered tail.
I did a series of photos at the angle of the one at the beginning of this post. Some of them work with the light, but in others, when I adjusted my shutter speed, the light is too harsh. What to do differently? Speed up the shutter more than I did or adjust the lighting itself – turn off one or two of the lights in the room, etc.
For the images that will be sent to the artist, the background isn’t that important. She needed the form and had certain requests. However, for the images that I would use in my portfolio, I need to pay more attention to the background. I encounter this issue with my own self-portraits. And for someone who notices everything, you would think I would notice this stuff before I snap the photo!
So, I know it’s only up from here. I can’t wait to shoot more daring nudes, nudes that aren’t anonymous or unapologetic. I can’t wait to work with dark skinned men. And I’d love to work with a man we’d describe as “husky”. Ladies are welcome. All in all, I walked back to the train station, snow blanketing the streets and my hair feeling pretty proud of myself.
Check out a few of the NSFW images from this shoot here.