I received the email re: Sweet Chick's opening in Williamsburg. It was touted as "Brooklyn's newest chicken and waffles spot". Although the duck sloppy joes on the menu caught my eye momentarily, I went for the chicken and waffles.


I had to know if Sweet Chick could measure up.

When we arrived at Sweet Chick at about 7:45, there was a 20 minute wait for a table for 2. Wednesday night. Since there was no room at the bar, we opted for the hostess to take our name and number so she could call us when a table was ready. 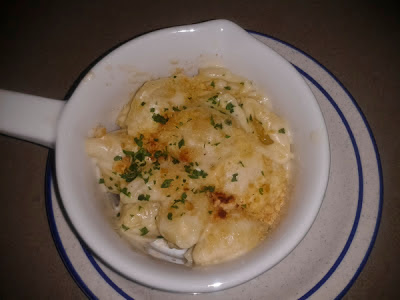 We started with the mac n' cheese. It was a good starter. A slightly larger order could be a good belly coater for a night of cocktails. I like my mac n' cheese with more seasoning but as my friend stated the pasta (shells) were a perfect al dente and great choice since they hold more cheese. Note: The cheese is at the bottom so don't be discouraged after your first few bites.

We requested that the rest of our spread be served together. I ordered the Chicken and Bacon and Cheddar  Waffles. My concern is they'd be too cheesy, overwhelming and too much of a departure from traditional chicken and waffles. They weren't. They also weren't crispy on the outside and soft on the inside like I prefer but they were tasty anyway. I didn't use a drop of syrup or the flavored butters. In fact, I ate that entire meal with my hands -- the ultimate compliment, Sweet Chick. The chicken was juicy and flavorful, the batter was thin and well seasoned. Brooklyn has a new contender...

As a side we ordered the Jerky fries -- seasoned shoestring fries which are addicting. We were sitting with puffed bellies, waiting for dessert and still picking at these fries...

Dessert. Our server, Deidre, informed us that they are all made in-house by their pastry chef. We ordered her favorites off the dessert menu. Mine: Cheesecake with roasted pineapples. The photo doesn't do it justice. The slice of cheesecake is enough for two to share and it's rich, soft with a taste the freshness. The roasted pineapple was a good compliment. I appreciate their stepping away from the usual strawberry, raspberry or chocolate topping/swirl/ganache. For me, the cheesecake was a good compliment to the salt of the meal. 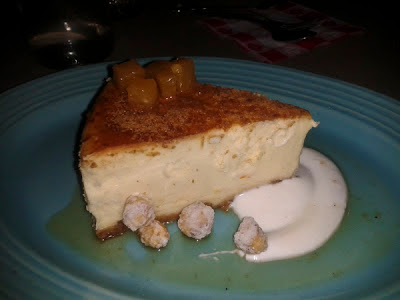 My friend ordered the chocolate pudding served with whipped cream and homemade graham crackers. No, I didn't order a chocolate dessert. Nothing's wrong with me. I passed on it because I'm not a fan of whipped cream. Judging by the way my friend licked her spoon, I'd say she approved.


Wednesday night's visit to Sweet Chick was about the food. I have to point out that EVERY staff member on the floor that night came to our table to check if everything was OK, or to serve us. I'll be back and park myself at the bar for a few cocktails. The vibe at Sweet Chick was welcoming with the usual Williamsburg crowd -- couples having dinner, groups of "the boys" getting elbow deep in chicken and beer and a birthday party.

I noticed the owner made a visit that night and saw a lot of people walking along Bedford Avenue taking note of the new addition to the neighborhood. I hope they welcome it.