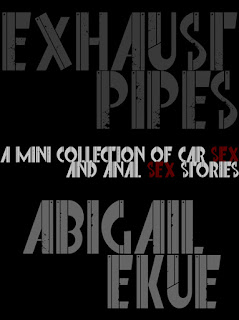 
The title, Exhaust Pipes, came to me in an AHA moment in the shower before I decided to add the two additional stories. Tail Pipes would've been too easy; I like big words and the shape of your mouth when you say "exhaust".


I set a goal for myself and reached it. That is always a great feeling. I remained in the cave writing and rewriting until I was satisfied with work I could put my name on. The book cover adventure is another story in and of itself but I settled on something "thumbnail-friendly".


I'm looking forward to your thoughts and reviews of Exhaust Pipes. One comment I already received: "You my dear are a romance writer. A beyond x-rated one. But a romance writer nonetheless."
I do love love. And folks in love have sex, right?