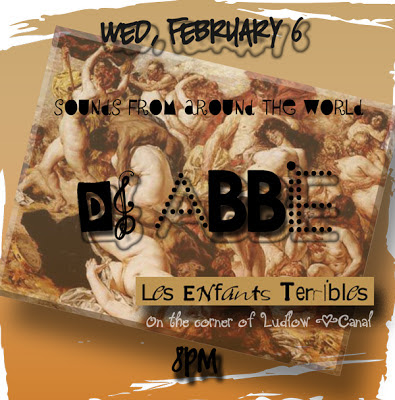 Ten days removed from my DJing debut. I've since come down off the high to the point that I haven't listened to music since. Which is astonishing for me. But I guess, subconsciously, my body and brain knew a detox was needed. I had a lot of fun controlling a room with music. In the weeks leading up to it, I organized most of my "world" music onto one playlist to make it easy. Then I organized them based on their sound or the mood they set. It's all about mood for me.

At one end of the bar, a friend who came out told me that there were two men who were really enjoying the music. Great, I thought. One of the men later approached me as I played "The Poor Men of Paris". He commented on the music I'd played up until that point and wanted to "extend his felicitations". I was impressed he knew Zero 7. I rarely encounter people who do. He knew I played Jorge Ben. He recognized the Malian music. He joked that I must've had their end of the bar mic'd because at the very moment they commented that they've heard everything and all they needed to hear was some Arabic music I played something "Arabic sounding" (Detni Essekra / Cheb Khaled). It was great speaking with him. He left before I got into the Bhangra, Reggae and Native American sounds (Look At This / A Tribe Called Red). There was dancing.


Friends came out to support too -- One who spent a year in Paris. My French-English language buddy came out with a group of people. One friend stopped in on their way back from Albany -- straight off the Chinatown bus. I received great feedback too ("Thanks for inviting me into your womb of music") and a DJ/producer I met that night said I create great ambiance with music and I should consider making mixes. Guess it's time to get back to these. I'll post some here. I have a bandcamp page that I should put to use too.


My first DJ experience was easier and more enjoyable because I got to do it at Les Enfants Terribles, my "Little France". All thanks to Tom Hatton. You probably recognize the name from my A Random Moment With series.We had 2 moments. And guess what? I wish I had the opportunity to do more that night. We had to make a last minute adjustment and I couldn't use the software I'm used to. The one I ended up using that night didn't allow for looping and special effects, just your basic cross-fading. I want to learn how to control turntables.


I have every intention of changing the date on that flyer. Listening "Look At This", I can do anything. Can't wait!