The Date That Wasn't 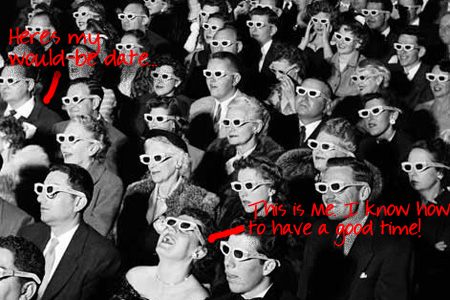 One of my recent forays into online dating...


We exchanged a few messages before deciding to go to the movies. Previous plans to go on a gallery crawl didn't pan out because of location (he's in NJ) and other plans (I had other plans).


He'd be in "the city" (Manhattan, NY) on this particular day. He played an active role in selecting which movie we'd watch where, took into account my travel, all that jazz. We had the movie and time all picked out (4:15pm on a weekday). We were going to meet at the theater. I had his photo queued up on my phone so I could match it up with the man I would meet.

He emailed to confirm the place and time again and closed that particular message with:
are we sitting together?


My instinctual, kneejerk reply was one that questioned his sanity and common sense while informing him we would not be meeting. I decided to tone down my response and instead wrote: Where else were we gonna sit? That is a strange question. I'll pass.


Him: I just assumed we were-wasn't sure where you want to sit.


Yeah, don't try to project that on to me, buddy.


I never messaged back. He contacted me again on SuperBowl Sunday and again a few days after that. No dice.


I'm not very patient with social awkwardness (especially in over 35 year-old men) or willing to see if someone's 'crazy' is merely a quirk.