A Random Moment with Jay White

I can never blame anything on the alcohol. It was the music. It took his sets for me to learn who Adele is, choose a Franki Valli song for my burlesque routine and discover The Supermen Lovers. Always an hospitable host, I had to get up with him for a interview even though he claims he's not as cool as everybody thinks he is. DUMBO. Halcyon. He rolled up on his motorized scooter and we got to it. 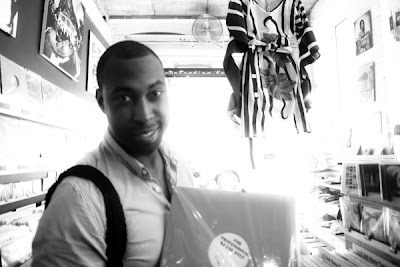 My name is Jay White. Brooklyn. I am in the hospitality industry. I’m also a student and a DJ.

A DJ. That’s why I chose you, that’s how I met you… but what do you do in the hospitality industry?

I’m a maître d' at Apothéke, in Chinatown. I was also a general manager for the same owner's previous business, The Wall Street Burger Shoppe and was a hospitality specialist during my college years at Starbucks—that’s where the hospitality background comes from.

My first gig, DJing, believe it or not, was at the Chelsea Hotel. I was nervous, I was sweating, I didn’t know what to play next. I had a friend who was trying to mentor me through the DJ process, Richie Beretta, and he was telling me, “play this next, play that next” – my set was like an hour but it felt like the whole night to me. But that’s when I realized I wanna do it, everything clicked.

Now that you’re comfortable DJing, can you describe that rush or that power you get from controlling a room with the music you select?

It definitely is a rush, I see people dancing, but the biggest rush I get is not when people dance it’s when I play something and someone comes and asks me, “Who is that? What is that?” I play a lot of different indie dance, a lot of things you don’t really hear on the radio. I do a lot of, I guess you could say, online crate digging, and I try to get that obscure sound. I’ve been getting into a lot of remixes of old 90’s R&B and no matter where I go, if I play it, like when I was in Harlem, I played that stuff, they loved it out there, I played it in the Lower East Side, they loved it out there, I like to play that “universal” kinda music, you know, even when I play hip hop, it’s universal. 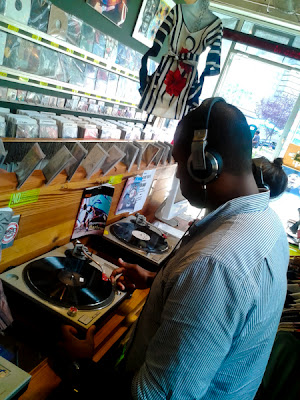 How do you handle those requests that DJs undoubtedly get?

I don’t normally take requests. I might lie and say I don’t have it but every once in a while someone hits me with a good one and I’m like, “oh, I forgot about that” and that’s the next song I play no matter what I’m playing, I find a way to get it in.

How long have you been DJing?

I’ve been DJing for a year and a half now.

I play my style because a lot of the gigs I get are because of someone that heard me spin somewhere. So I don’t really change it up because that’s like you aren’t you and they hired you to be you so I play whatever I feel like playing. Do you currently have any residencies?

It’s good fortune. You know, I’m building up. It definitely took a lot of work; like throughout this year and a half I would spin sometimes in two places in one night, playing for free, I was spinning for like 12 hours, just really trying to build a fan base and also to really show some venues what I can do. I feel like it paid off.

For you, or for the DJ industry, have mash-ups been good or bad?

I think I’ve played a handful of mash-ups in the last year and a half. I’m more into remixes than mash-ups. Just because I like a mash-up doesn’t mean everyone else will like it. I think remixes… you get a lot more play than the mash-ups.

There’s one word in Japanese that I really believe in and it’s Esho-Funi. That’s my favorite word because it means the oneness of self and environment; I practice Buddhism and the thing is, for us to unite we have to be many of body one of mind and it’s like we all are different people, but if we all have the same mission for peace or whatever it is we’re fighting for, we will win. That’s what really stands out for me. I really like that word. 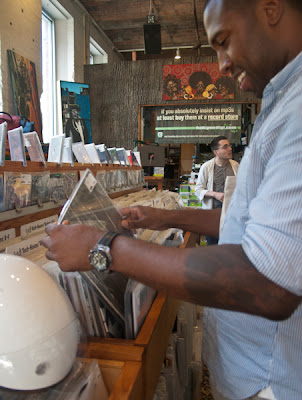 We’re in the digital age now, but is there a preference for vinyl or iPod when you DJ?

That’s a good question ‘cause I started out with Mp3s but I learned to control them with vinyl. I really like the feel of vinyl and controlling it and that led me towards buying vinyl.

Now that I’m actually starting to play vinyl it’s not the same cause vinyl is a lot more sensitive. I enjoy records more than I enjoy Mp3s now but Mp3s are a lot cheaper than vinyl. But if there’s a song that I really enjoy, I get it on vinyl. Just because when I buy a record, I know the artist, I know the record label, I know the year it came out, I really know the song. When I buy an Mp3, “Oh I like this song” and I just buy it. I know the song but I forget the name of the song, forget the artist unless I’m like really in love with it. With vinyl you wanna keep buying from that label or you wanna keep buying from that artist, you really get to learn that stuff.

Are you ready for some football?

I mean, I’m into the SuperBowl but I don’t follow it, which is something I’m trying to break through because it definitely becomes a topic of discussion, every time, all the time, so I really need to get into it.

Oh, I’m a Giants fan. My Dad is a Giants fan so that was in my blood from birth—I had Giants everything. If I didn’t like the Giants, I couldn’t watch football with him. It’s like, “go in the other room.”

How important is social media for you as a DJ?

For me social media’s important but it’s important if you have something to say. And I’ve learned through using it, ‘cause in the beginning I used social media for everything—I’m eating this, I’m doing that—and people start to care less. In the last 6 months I’ve been using social media for key things; if I really find something interesting, I’ll pass it on. If you post key things every once in a while and you reply to people, interact with other people you start to get to know people you don’t know, they start to repost… it’s how you use it.

Is there an event or type of event that you’d like to DJ that you haven’t yet?

An event that I would like to DJ… Yes. I would love to DJ for Ultra in Miami. Ultra is a music conference in Miami. 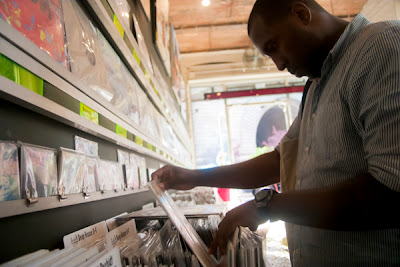 Most of your gigs are late nights or overnights. Does that take a toll on you? How do you handle that?

You know, it does take a toll on me because some DJs I meet don’t drink. I drink. And I have to wake up early so I’ve definitely gained a few pounds from drinking and late night eating and I’ve realized that I need to go to the gym and balance it out.

Does it affect you creatively?

No it doesn’t. I guess ‘cause I’m a night owl anyway, I feel most creative towards the evening and I feel like the blood starts flowing. But I’m back in school now and I’m learning how to really channel that whenever I need it—I’m in school all day, I’m using the brain and then at the night, I’m using it again—so night time is when I really feel [on] especially with a little drinky-drink… (laughs) 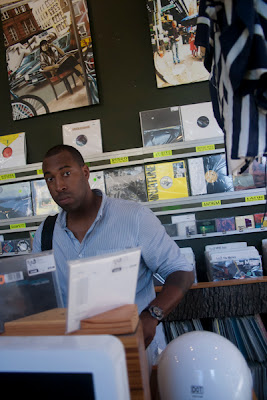 Can you think of a song or an artist that defined your adolescent years?

That defined adolescence for you. ‘Cause of the “humpty”?

Ok, I got two songs. I got “The Humpty Dance” and I have Billy Joel, “Piano Man”. I was home all day with my Mom as a kid and she would listen to “The Humpty Dance” and Salt-N-Pepa—she really let a tape rock til the tape popped—so when I heard that line, I knew what Biggie was talking about. My Mom, she listened to hip hop and R&B. “The Humpty Dance” is one song that she played… I know the song front to back just because she played it so much and my Mom used to exercise in the living room so I used to hang out with her and listen to the same song so that reminds me of my connection with my Mom and how she got me into hip hop. My Dad listened to classic rock and like light rock and Billy Joel’s “Piano Man” is like the first song that I learned on my own. I got a CD player for Christmas and the only CDs we had in the house were Elton John’s Greatest Hits, Frank Sinatra and Billy Joel. Billy Joel was the one that I connected with, I felt like that was my previous life; it was like I was that man or that person he was singing about.

Complete this statement: If my muse were an animal, it would be…

If my muse were an animal, it would be a lion.

I don’t know. I’m a Leo. I’m a lion so I feel like I gotta be connected with that. And that’s my favorite animal as well.