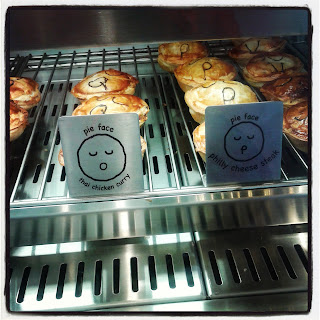 Due to the fact that I haven't been to Australia yet, the only taste of Down Under I've had thus far is a burger creation at The Sunburnt Cow (another Hurricane Sandy casualty) a few years ago.

I can now add a stacked Philly Cheese Steak pie.

But it was not in lieu of compensation for this endorsement. Au contraire. I went to Pie Face to satisfy my curiosity and sweet tooth on a Saturday afternoon and ended up walking out with dinner.


I went straight for the sweet stuff and ordered a Pear & Ricotta mini pie and the Apple Crumble. I do love ricotta cheese and wanted to try it paired with pear instead of peaches or raspberry that I usually see on menus. I've always enjoyed crumble pastries and the Apple Crumble from Pie Face is a starred addition to my list!


I'd prefer they serve their sweet pies warm. Next time I'm in there I'll ask that they heat up the Apple Crumble for me. It's so good.


They bake their pies with butter. Butter. Yerp.


On my way out, I found out that I could spin the wheel for a chance to win select options off the menu. Why not? I waited while a family visiting from Australia chatted up the prize wheel attendant -- they were familiar with the Pie Face brand from back home. 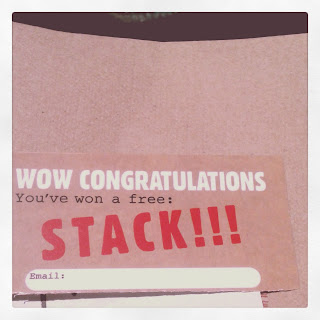 I had my Price is Right moment and won a free stack! I asked for a suggestion of which one to get -- her favorites are the Philly Cheese Steak and the Chicken and Mushroom. No go on the second because it reminds me too much of pot pies with I do not like. Great choice on the former. What's a stack? It's a savory pie stacked with mashed potatoes, gravy and green peas. The crust is flaky and the filling pretty flavorful. Wasn't sure how I'd feel about the mashed potatoes and gravy on top of a pie but it works and the portion size is just right.


While I waited to claim my prize, I learned the "hidden" meaning behind the pie faces and also what an Australian Lamington consists of.


I went back the next day for an Apple Crumble.