Life Among The Barbarians 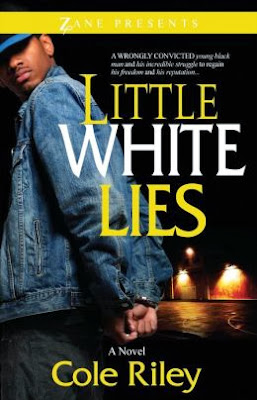 When Abby invited me to do a guest blog on her blog, Random Musings, I leaped at the opportunity. The timing was perfect. This week, my novel, Little White Lies, was published by Zane’s imprint at Simon & Schuster, Strebor Books. It is causing quite a stir. It has already been chosen as the main selection by the Black Expressions Book Club for December.


As my friend Zane says, “Little White Lies is an amazing novel about how making one bad mistake can change your entire life. It gives new meaning to "being in the wrong place at the wrong time.” However, in this terrible age of Trayvon Martin and the stop-and-frisk epidemic, I believe its themes are deeper than that. It’s about an all-out war against young black males and their neutralization by the greater society. As a journalist and former long-time reporter with The New York Daily News, I witnessed how the plagues of educational, economic, and legal freedoms are denied them.

Probably the idea of injustice filtered through the notions of racism and classism came to me from the stories my grandmother told me about how she, along with others, petitioned to get the government to pardon the Scottsboro Boys. Her eyes lit up as she recalled how these nine country boys were falsely accused of gang-raping two white women aboard a train in 1933. The women lied on them and they got long sentences. I remember that story because I was ten and she gave me a copy of Richard Wright’s masterpiece Native Son.

Just last week, Derrick Deacon, a black man, was released after spending 25 years in prison for gunning down 16-year-old teen in Brooklyn. A member of a Jamaican gang was finally identified as the killer in 2012 and the witnesses said they lied for fear that they would be harmed. That’s why this book, Little White Lies, is so timely and provocative. It concerns a promising high school basketball star, who decides to party with some of his brother’s friends, but the evening of fun and frolic turns ugly. He is so drugged that he’s out of it.

When the two white girls accuse him as the mastermind of their brutal assault and rape, his world collapses as one of his boys turns state’s evidence to get a lighter sentence. As one reviewer wrote, this series of events could happen to anyone if you’re young, male, and black.


Being a reporter, I covered the anti-crime, pro-gun campaigns of many politicians, both locally and state-wide. We saw this rhetoric in the opponent in the last New York City mayoral race, where footage of a motorcycle rampage was used to scare voters. In the book, the father of one of the girls, who is running for political office, says: “Don’t tell me that crime doesn’t impact our daily lives. This is our city. We cannot let this great metropolis slip into the savage grip of these thugs and outlaws. How can we allow this city, a mecca of pro-business and pro-growth, to be transformed into a jungle of vice and corruption?”


One of my literary mentors, John A. Williams, who wrote many Old School classics such as The Man Who Cried I Am (1967) and Clifford’s Blues (1999), once told me that his purpose as a writer was to get as close to the truth as he could. He said the rest of it was all bullshit. His advice echoed in my head when I started writing the book. I wanted the final written work to not be a phony case history but a life lived on the page.

I lived this story. I taught cons and at-risk kids. I had been a thug myself before I straightened out. One white reviewer said the novel made him uncomfortable. Good! This is real. This was not my imagination running amok. This madness happens every day.

It seems it’s open hunting season on our youth. They have given up hope. All they have is rage, hence the knockout game on elderly folks. They pack our courts, our jails, our prisons. Nobody says when they go to jail, that they can no longer vote or hold a good job and are deemed second-class citizens. Everybody’s scared of them. And there are powerful forces that are working overtime to maintain that fear and mistrust. All I wanted to do with this novel, Little White Lies, is to show the other side of a bad situation, to put the readers into the shoes of the lead character Melvin, to tell a good story and scare the hell of them. And I think I did a good job. Check the book out.