The Undertaker Vs. Roman Reigns at Wrestlemania 33: NOW is the time

Back in 2014, I wrote about why a Wrestlemania match between The Undertaker and Roman Reigns should not have happened.

After Roman Reigns eliminated The Undertaker from last night's Royal Rumble it was written. Once The Undertaker shot his "Are you crazy, boy?" death glare at Roman Reigns it was on. Try as they might, WWE Creative cannot get the fans behind Roman Reigns as a face. However, he doesn't need to do a heel turn for this match with The Undertaker at Wrestlemania 33 to work magnificently.

The WWE Universe will spit vitriol at Reigns regardless. And like John Cena, Reigns is now feeding off the heat he receives from the fans. That's only gonna help him and it's gonna be a treat for us. Reigns has matured  a lot in the ring since the days with The Shield. He can work a match with The Undertaker now and tell a great story, execute career-defining spots and I also think he's willing to learn and grow from a working a match with The Undertaker. Removing him from the Universal Title picture for a little while won't hurt his career.

Not facing The Undertaker at Wrestlemania 33 after eliminating him at the Royal Rumble would be a wasted opportunity. 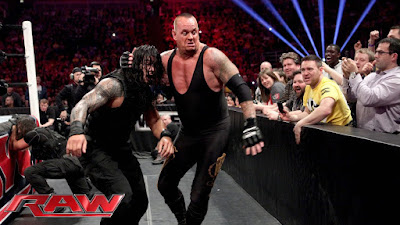 At Wrestlemania, The Undertaker gives us that match the we care about that's not a title match (sometimes even more than the title main event). The fans get to chant "Holy Shit!" during "One More Match!" from The Undertaker.

The Undertaker won't return to full time action. Yet we have 9 weeks to craft this story. That's 9 episodes of WWE Raw to flicker the lights in the arenas, have stare-downs in the ring, tease us with the will-they-won't-they, have The Undertaker deliver lines like "29 holes for 29 souls..." 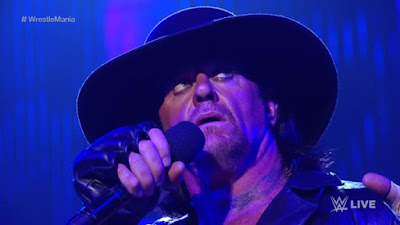 We know what The Undertaker is willing to do to put on an unforgettable match. The Undertaker will put his body through it all for us, for the industry, for Wrestlemania and for the man in the ring he's working for.

I asked that back in 2014. 2017 we'll see once again that The Undertaker owns the yard... or that he's always been willing to put over a guy who deserves it.

There's no streak on the line but there's still bragging rights. And although it's way too early in Roman Reigns' career to throw around the word 'legend', this match still has a legendary feel, it's a fantasy match, one we thought we'd never see like the Brock Lesnar vs Goldberg match we Still. Haven't. Seen.

WWE Raw (WWE Creative) may finally be getting into a rhythm since the brand extension. Reigns was a surprise entrant into the Royal Rumble, didn't win and yet we're still eagerly anticipating his Wrestlemania match. That's the way to do it.