Touch Me At Your Own Risk

I heard this morning on the radio about incidents of subway groping going way up, especially in Manhattan and how they expect with the Holiday rush, it's only going to get worse. I did notice the campaign about sexual harassment on the subways and had to shake my head at the fact that not only is the problem getting that bad, but that they have to tell the victims that it's not OK. This is ridiculous. What is wrong with these men? I have made reference to the jostling of bodies and lingering touches on the train in a consensual matter or in fiction. But this happens more often than women are willing to admit and that is the problem. I'm well-aware that during rush hour, there is very little personal space and having grown up in NY, I'm very tolerant of it, but that's no excuse for your hand being in my ass crack.

I caught a lot of heat on the NY Times City Room Blog last year when I said something to the effect that these crazy, sick men prey on women they think or know will be too scared to say anything or too lost in their own worlds to notice. You know how many times I've just stared at someone just to see what will happen and they never see me because they never look up? They have no clue what's going on around them. They make themselves targets. There's no eye contact. So even if someone did "attack" them (rob, grope etc.) they wouldn't be able to identify them! I remember a few years ago sitting across from a woman and man who didn't know one another. The man would slowly inch his hand under his newspaper and rest his fingers on the woman's thigh. I was shocked that she didn't even feel it.

Side note: There's this middle-aged Black Man who rides the 3 or 4 train in Brooklyn. He gets dressed up in his suit as if he's going to work, puts his briefcase on his lap and takes out his newspaper. Because I'm a crotch-watcher, I noticed there was a lot going on in his pants the first time I saw him. I figured it was just saggy-old-man balls. But then I realized the way he was looking at the women on the train and he would move his leg to create friction so he would get hard. I've seen him a few times. On one occasion, another woman noticed him as well. When he realized we both knew what he was up to, he got off at Franklin Avenue and we both started talking about how disgusting he was. I even saw him on a Saturday morning once wearing powder blue pants. There was no way I wasn't gonna notice him. I haven't seen him recently, but I'll be sure to take a picture next time I do. In the meantime, here's a pic I took from my kitchen window of this Peeping Tom I called the cops on in my neighborhood. 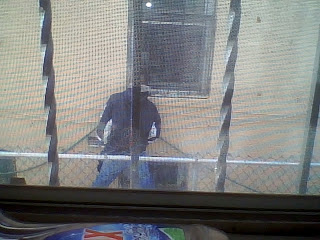 I've never been groped or sexually harassed on the subway. And rest assured if I ever am, there will be blood spilled. Not because I think its warranted, but because I know I'll be that annoyed and angry. I already see the incident playing out in my head--he grabs my butt or pulls out his dick, I elbow him in the nose, shattering it and causing him to choke on his blood and bone fragments. I have a violent streak that is unleashed when I'm angry, when I feel threatened or when someone gets physical with me. Recently on the way home from having lunch with a friend, I was at the Chambers Street Station. When the train came, I walked up to get in the "right" car and boarded the train through the same doors as this other young black woman and this little man. Little, like MY height little. I sat by the opposite door. She sat diagonal to me on the other side and he sat RIGHT next to her. I had to look around to see if anyone else noticed that. This was the middle of the afternoon and there was so much space on the train. She saw me looking and I think that made her uncomfortable, but I knew Little Man was up to something.
Then it started. He kept sneaking sidelong glances at her. She put on her iPod and tried to ignore him. I kept watching. Little Man took off his coat and put it over one of his shoulders and I saw his hand disappear. My blood pressure rose. At the next stop, she got up and moved to the corner of the same 4-seater bench I was sitting on. He got up, and sat right across from her in the 2-seater in the corner. Now I'm sure I was pushing 190/110. I looked over at her, about to ask her if she knew him (I knew she didn't but I wanted to call attention to the situation). She didn't make eye contact with me but I looked Little Man right in his eye until he looked away. I took out my phone which takes VERY good photos. He started fidgeting because I was making him uncomfortable and that was the point. Then he did the coat trick again and kept looking at her legs (she was wearing a skirt) and his hand disappeared again.
QUICK FLASH I get up and open the doors as if I'm about to go to the next car, grab him by his ear and throw him onto the tracks
Actually visualizing that brought my blood pressure down a bit. She slid over, closer to me, so she wouldn't be directly in front of him. That's when I tapped her and asked very loudly, "Is his pants open?" I don't speak like that, but I was so enraged that my proper English escaped me. "I think so...that's why I moved." The train got to Borough Hall; he grabbed his stuff and rushed off the train. At the last second, he doubled-back and went into the next car...I'm sure to find his next victim and jerk off next to her.
In a crowded subway car, if we say something when to a man pressing his crotch against us, it turns into situation of "us" against "him". Believe me, there are other women out there as angry as I am who will have your back and the men who will probably kick his ass too. Don't fall into a "why me?" mentality. "This train is full of other people. Why did he chose me?" If we don't say or do something, we're giving him even more power. They get off on victimizing us and getting away with it amongst all those other people. Empower yourself, Ladies!!