A Marathon Of Inspiration


After drinks and a PG-13 rated sleepover, we woke to sunshine and cheers from along 4th Avenue. My sleep haze cleared instantly as I rushed to his living room window. The wheelchair racers whizzed by on their hand bikes.


I've always had a connection with the ING NYC Marathon--maybe because it takes place in November, maybe because it's a "NY thing", maybe it's the athleticism of the event but I watch it every year. One year, I watched from the Columbus Circle entrance of Central Park. I was really depressed that year and the marathon was quite the morale booster.

We kneeled in his arm chair hanging out the window. He warned me not to drop my cell phone as I took photos and video. On the television in the other room, the Elite Women took off. So we waited patiently to watch them pass the window. Then the Elite Men sprinted by. Then the rest of the 47,000 marathoners. Watching the participants from the window was soothing, hypnotic and yes, inspirational. Amputees, blind participants, senior citizens who couldn't straighten their backs were trekking along the 26.2 mile course. I was sucked into the national pride runners wore on their chests--hello to Brazil, Italy, France, Ethiopia, Ireland, and the bare-chested English and Canucks. I was also taken by the bodies that ran by and how attractive they were. It stands to reason that people who are fit look good, but still I was rather enthralled.


My friend had to call me three, maybe four times before I responded when he returned with breakfast; I was transfixed by the scene playing out in front of me. Fourth Avenue was now thick with huffing bodies, flattened cups and slick with Gatorade, sweat and water. And although everyone's gait and cadence was different, after a while they all look like one large rumbling organism, that wave of humanity shifting the pavement.


My mother called during the Marathon. She heard the bells, whistles and cheering in the background and I told her I was watching. "You should be running with them."

Ugh, the thought of running, long distance goes against every fast-twitch muscle fiber of my being.

"I could easily walk a marathon..."

I told her about what was happening and what I'd witnessed earlier, she told me my uncle had run the marathon years ago.


The NYC Marathon is a test of physical endurance, mental strength, part party, part parade. The Universe places you exactly where you need to be. I was worried I'd miss the marathon for the first time since I can remember. Instead I had a front row seat. After a recent bout of illness that forced me to sit out a few workouts, and the collective hours sitting in doctors' office waiting rooms, the marathon was even more of an inspiration. Without fail, my workout the next day was beast. And I loved it.


As much as I say I'd never do it, I can see running a marathon being one of life's challenges that I face and overcome. 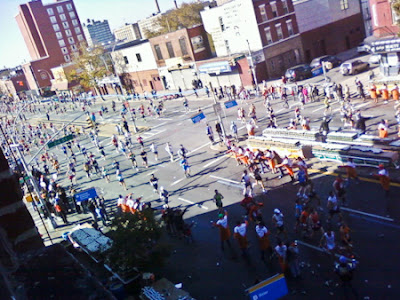