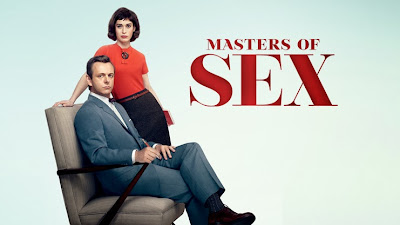 Ah sex. We love it, don't we? In 1956 America, folks were doing it but not for reasons we may think.


The thought that a woman could enjoy sex simply because and not need love to go along with it was unheard of.


Sex, no matter if it's for the sake of science, was considered smut.

When I first saw the posters for the series Masters of Sex in a subway station, I assumed it was a period piece about Kinsey. So look at that, even I learned something from this show. The show is actually based on William Masters (Michael Sheen) and his assistant Ms. Virginia Johnson (Lizzy Caplan) also known as Masters & Johnson.

Masters of Sex is the new series on Showtime about a doctor and his assistant who set out to learn all the truths about sex -- primarily the body's response during the four stages of sex: excitement, plateau, orgasm and refractory and a focus on how women respond during sex. Masters of Sex portrays sex has an act with anatomical and physiological components but doesn't stray from the emotions that come with the act. I had an emotional response to the scene when Ethan Haas (Nicholas D'Agosto, who clearly had his mind blown when Virginia blew him) dragged her out of the party and threw the ultimate of irrational man tantrums. He threw around words like "fucking" and "made love" -- the two aren't one and the same for everyone.


After having his study kicked out of the hospital, Masters turns to the professionals: Prostitutes. He moves his entire "laboratory" into a brothel and calls in a favor from the Chief of Police so there won't be any more raids. I hope the series continues to portray sex workers in that light. Yes, being a sex worker doesn't make one an inherently bad person or one of "lower" status and yes, it does give them a leg up (ha!) on sex and sexuality.