A Random Moment With Johnny B. Azari

I met Johnny B. Azari at the restaurant Les Enfants Terribles (no more), then a week later I accepted his invitation to attend a performance of his blues duo (no more). Last year, I found out he wasn't in New York City anymore. But my love and intrigue for Johnny B. hasn't waned. He's currently touring the US -- The Tropic of Entropy tour -- leaving his mark and being marked. Track his music, movies and live performance dates on his website. Keep up with this ramblin' man on Instagram. He's making his way back east and when he gets to New York, I'll be sure to catch up with him for an update.


Before he embarked on his tour, I had a few questions for him...

Pretend there's no Google, no Wikipedia. What does "Tropic of Entropy" mean?

A solid first question. Honestly it caught me off guard because no one has asked me that before.  I think everyone just accepted it as a string of words loaded with meaning, which is very much how I looked at when I wrote it years ago. I remember the moment I first penned the words "from the tropic of entropy, I gaze at thee". It was a text message I sent to girl whom I was attempting to woo. The girl proved to be a lapse in judgement but the line stayed with me. If I was to give it a literal translation I would fail. So let's give it an abstract and convoluted one: The Tropic Of Entropy is the metaphysical, geographic center of the pan-individual madness.

You believe the purpose of art is to transform the mundane to things profound. Does that mean you can make art out of anything?

Art is the act of transformation. What the artist choose to transform is up to the artist.

That is the purpose art has for me. I have never looked at art as entertainment or distraction. I have always felt art was the mirror that accelerates personal evolution. These days, most art is manufactured by or for corporate interests, and its function (unintentionally) is to suspend that evolution. It empties one of their personhood; the void then is filled with superficiality, distraction and spectacle. There is often little attempt to examine that which is complex, painful or slow. Rather, the aim seems to be to dismantle the reflect capacity and replace it with an alternate reality. My aim with my work is to enable the reflective capacity and let it loose in an alternate reality. I am not saying I am successful in this endeavor, I am only saying it is what I endeavor to do.

But to answer your question: yes, I believe one can make art out of anything but that does not make anything one makes art.

You have no plan and you set no intentions for this tour... There's no intention to succeed? To entertain?

What's your favorite word (in any language) and why?

Fuck. Fuck is my favorite word because it is the most versatile word in the English language. As far as "parts of speech" go there aren't many other words that can be used in just about every application or situation. Fuck is never misunderstood and communicates quickly and clearly the emotional weight of the situation at hand. My favorite form of fuck is in the verb form; as in to fuck.

[Johnny B plays Detroit on September 19 at PJ's Lager House]

Man is the motherless child of nature. Nature is what will bury man when man is done digging his own grave.

[Here Johnny B tells you how he really feels]

When we met you were a member of a band, had a musical side project going with another friend and now you've teamed up with Alexandra-Elisabeth. How important is collaboration to you? Is collaborating something you're compelled to do?

Collaboration is something an artist must do unless they wish masturbate 'til they're dehydrated. Collaboration is the only form of alchemy that is not a myth. The band you mention, The Nihilistic Sex Machines, is a tear that lingers on my heart, still. My partner in that band, Darius Greyson, is one of the most talented and tortured friends I have ever known. I'm saddened by our falling out. I believed in him like I believe there is no such thing as private property. However that is the mixed curse of holding hands with people. No matter how hard you grasp, all things slip. Like lightning transforms sand into glass, collaboration is a violent process often yielding strange things.

As for Ms. Alexandra-Elisabeth, she is the synapse that tells my heart to beat; the kiss upon my despairing lips; the song that death row sings; the Higgs Boson in the throat of creationism; the space between rain drops; my gypsy wife and the only person I have met that can turn wine into water.

Who would Johnny Azari be without the hair?

An ugly motherfucker with a huge nose not offset by huge hair.

And here I thought your hair was a trademark... 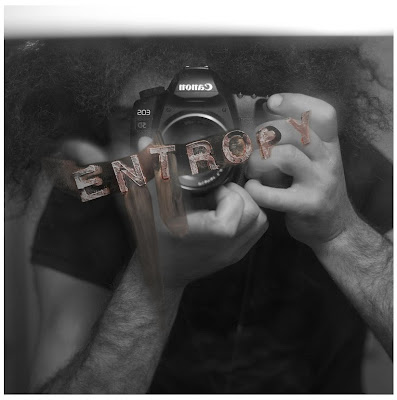 Any reason besides narcissism for shooting self portraits?

Sometimes all you have around to shoot is yourself. May it be with a camera or with a gun.

Any direct connection between your portraits and your music?

Since all things are connected, both in physics and spirit, the question of it being direct or detached is a distraction from the essence. The Essence being (for me) entropy - the decline into disorder and void.

Complete this statment: If my muse were an animal, it would be...

If my muse were an animal it would be Cerberus. Cerberus never used words to communicate, rather symbols. For example in Dante's Inferno when a soul enters hell Cerberus wraps his tail around himself to signify which circle of hell the wretched soul was to spend eternity; seven curls for the seventh circle etc.

But if I am to choose an non-mythical animal I vote Whale. They are earths finest nomads and roam greater distances than any other animal (besides man). They are the the oldest Rambling Man about and they do it with such gentle hearts and regal grace.

Note: Since conducting this interview, Johnny B is without his gypsy wife and without his guitar (it broke and he had to use money for his tour on a new one). He is fundraising for the latter. I can only assume he's using music to heal from the former.