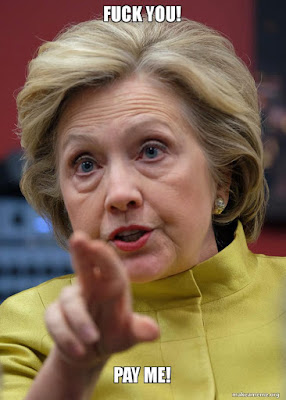 As soon as I heard the report on 880 AM this morning about Colin Powell's email account getting hacked I was bothered. I felt uncomfortable and I also sucked my teeth. I was reacting to his comments about Hillary Clinton. He shared in emails that he lost a speaking gig because of Hillary Clinton--her speaking fee was too high. He said she screws things up with hubris and blasts Clinton for having 'unbridled ambition' (and to think she's not as 'loud' as she could be!).


Again, I was overcome with an instant feeling of discomfort and annoyance.


I don't know Clinton's speaking fee. That's not the point. What I thought about was how Powell was implying that she was charging more than she is worth.


Here's a man who's upset that a woman 'cost him money'. I wonder what's the going rate for politicians to speak at universities. How much are men getting paid?


"I am not an imposter. I am a professional. I am worthy of praise... and higher rates." To my fellow female entrepreneurs #impostersyndrome
— Abigail Ekue (@abigailwrites) September 2, 2016


This all made me think about the women who dumb themselves down around men. Women who constantly dull their shine. Women who don't go after the promotion or raise because they don't want to come across as too pushy or wanting too much. The women who are paralyzed by imposter symdrome, thinking they aren't as phenomenal as they are, who are constantly left negotiating their rates and their worth and questioning their professionalism while simultaneously having to prove their professionalism and worth. Women who don't want to rock the boat, be ambitious (cause apparently that's a negative trait in women), charge what their worth because they don't think they deserve the pay or they don't think clients/customers will pay.

In the beginning, I had that issue. Some days it still flairs up. But that uncomfortable feeling I had upon listening to the Powell email story was proof that I'm doing what's right and I know my worth. When you feel physically uncomfortable charging what you charge or lowering your rates, that's your intuition, the Universe, God, whatever you call it, telling you that it's not right.

Aside from sex, money may be the last taboo. We don't talk about it. We have limiting beliefs about money. We each have a money monster we have to battle and a money honey who's waiting to love you. I learned that from Morgana Rae.

Last month, I tweeted about rates and the such. I don't remember exactly what triggered it but it was probably something similar to this Powell/Clinton story. It resonated with some other tweeters. It was also a reminder to myself.

Charge what you are WORTH. Customers/clients will VALUE your service/product... and PAY your price.
— Abigail Ekue (@abigailwrites) August 5, 2016