Am I A Black Feminist? 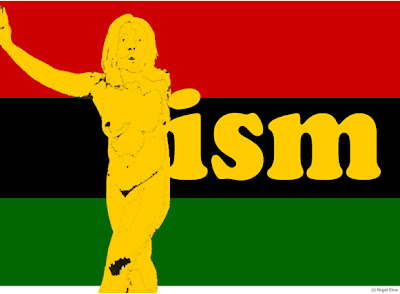 During the week of Thanksgiving, The Lion's Historian asked for my thoughts on Black feminism in 200 - 500 words. I wasn't sure I'd get any words because I'd never thought of myself as a Black feminist. So I thought, I scribbled notes, I mused in the shower, I did some freewriting in bed, I even caught Sex in '69: History of the Sexual Revolution in America that same week.

Here's an excerpt of my essay:
Black or Feminist or Black Feminist?
I never really thought about where I fit on the feminism scale. I am pro-feminine rights; does that make me a feminist? I am a Black woman of direct African and Caribbean descent; does that make me a Black feminist?
I identify with the radical feminist view that there needs to be a cultural change away from patriarchy. I’m not anti-porn, but I do believe that suppressing sex (art, education or the act itself) is an issue that most affects women. Equal sexual & erotic rights would make me a happy camper. A world without a double-standard. If women take control of their sexuality, they have control of their life. Without sex, there is no life.
As a Black woman, I seem to be an anomaly in my sexual freedom. It is often misconstrued as promiscuity. When it comes to sexuality, Blacks try hard “not to be white” that we end up stifling ourselves, instead of acting on individual preferences...

SUBJECT: Am I A Black Feminist?

Last week, The Lion's Historian asked a few of her "fellow African-American, female bloggers/artists/thinkers/activists to gain a little perspective on Black Feminism" -- What it means to be a Black Feminist or if we even consider ourselves to be Black Feminists at all.

Where does a Black female, sex-positive artist fit on the feminism scale?
Am I a Black Feminist?
Until last week, I had never really thought about it. I wasn't around in the 60's burning my bras or marching on Washington with NOW -- those are the first thoughts that jump into my head when I think about feminists.
I am not a man-hater.
I am not anti-porn or a member of a campaign for decency.
I believe a woman should have the right and choice to do what she wants with her body.
I want a fair and equal salary to male counterparts of the same education level and skill set.
I expect, accept and reward chivalry.
So in my usual fashion, I mused "out loud" through my words on the topic of Black feminism along with other thinkers on The Lion's Historian.
Please take a moment to read, the state of the black feminist union, and weigh in on the topic.

I received a few direct emails from those who read the post, those who were glad the topic was being discussed, those who wished they had had the opportunity to share their opinions.

This morning I received a thoughtful and inspiring message. It inspired me to design the Black feminism/ist logo above. I could comment further, but all that was said in that email said it all. Thank you.


SUBJECT: Re: Am I A Black Feminst? Yes.

I was alive and fully aware of politics during all of the 60's, even when they started and I was 4 years old.  By the time the bra burning protest happened, I was also aware of racism.  Those were and are still the extremes.  Both needed extreme action to be noticed and corrected.  And in my opinion, there was no stigma attached to feminism that should be misused as a negative concept today.  Yes, you are a feminist and I see you as a 10 on that scale; I don't need any "scale" of someone else to say that.  Yes, all the values and ideals you listed are VIRTUES you are to be proud of.  That you are as young as you are while also being conscientious of both history and basic human freedoms is incredible.

Abigail, I'm sure you've noticed precious few black women pose fully nude for anything other than pornography or strictly "artistic" photography.  It seems being nude coupled with being a black women is all but non-allowed.  You present something rare, something on the crest of the same radical changes that came from the 60's but didn't stick longer than the smoke from those bras.  No matter how you choose to pose or how you choose to be photographed, you are a pioneer.  It's both sad and encouraging to note that: sad in that 40 years of the world knowing better didn't amount to the world doing better, and; encouraging in the fact you grew up during this sorry state of affairs without being brutalized by it and losing yourself the in popular mass acceptance of "femininity" as something lesser than "humanity".

I've said before and will say again: you are priceless.  What I probably haven't said before now is that you are a feminist.  I didn't find the need to separate you by gender.