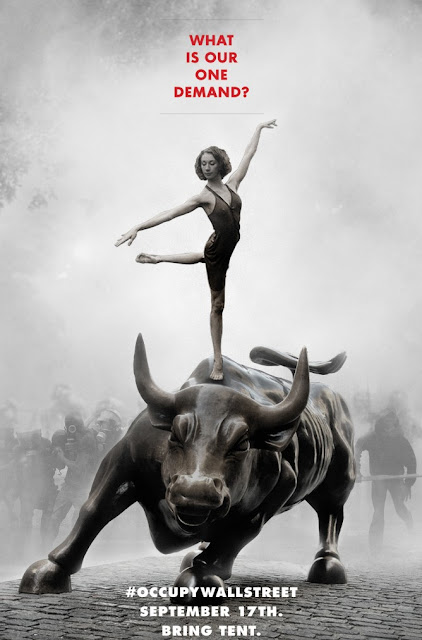 I'm reporting to you live from home. Not from Zuccotti Park or Washington Square Park or a holding cell. I haven't been down to the protest site. Me, Miss Rebel Rouser. I most certainly have reason to. I am part of the 99%. Don't have a job to call out from to join Occupy Wall Street (one of the reasons I'm in the 99%). Yet, the protest, the movement, doesn't feel organic. Would I be more inclined to participate if there was tear gas involved? If I had the opportunity to hold hands with Al Sharpton or Jesse Jackson? If they were burning effigies? For a protest, there seems to be a lot of rules and regulations and scheduling. Are they simply trying to bait the NYPD into committing brutality?


When they said Occupy Wall Street, that's what I thought they'd do. Block entrances to buildings, camp out in the lobby of 60 Pine Street, clog the Wall Street subway stations. Granted, many of the workers on Wall Street can work from home but maneuvers like that would make the "corporate bigwigs" think twice about coming to work. The protesters are in a park providing walking lanes for commuters. I've read their "list of demands"; there's that tiny sliver of haves that need to realize that the have-nots are pissed. We need to go Robin Hood on them. As result, I haven't ventured to Occupy Wall Street. I've viewed some photos online. Barely sat through 30 seconds of coverage on livestream.


I guess I expected more of this:


Those are my current feelings. They are subject to change.