On Friday, November 2, what turned out to be hours before power was restored to most of Lower Manhattan, I took a second trip to see what was going on and how residents were managing in the New York neighborhoods of Chinatown and the Lower East Side, TriBeCa, Battery Park and the Financial District 5 days after Con Ed had cut power below 34th Street. 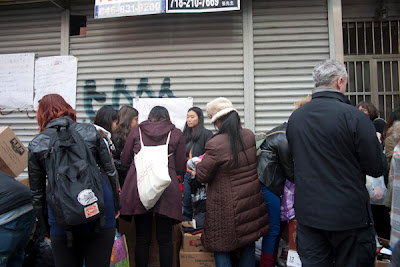 After I walked across the Williamsburg Bridge and headed down Essex Street and found Hester Street full of activity. It was a Hurricane Sandy relief and volunteer staging area organized by CAAAV. They were handing out water (photo) and non-perishable goods, donated clothing (with no heat or hot water folks were dressed in numerous layers for days on end), organizing trips to surrounding housing projects, and allowing people to charge their phones. 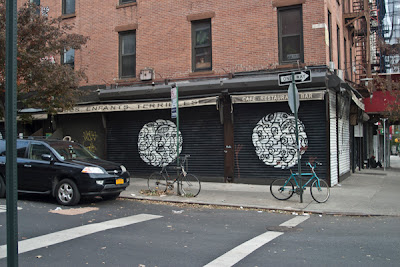 I passed by an old favorite haunt of mine, Les Enfants Terribles. It was strange seeing it shuttered. Note the man sitting outside a business down the block. Many people had come out day after day after power had gone out to clean out flood waters or to guard their businesses against looters. 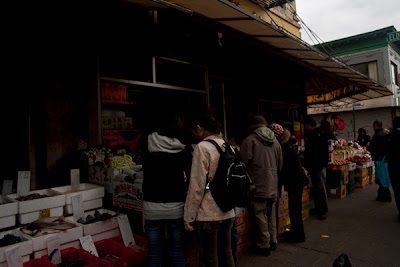 Businesses that could open had a steady stream of customers. Life, without power, went on for residents of Chinatown. 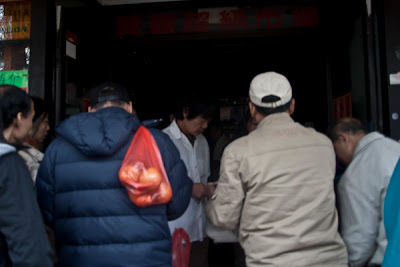 Through it all, the Chinatown BID made sure their neighborhood was clean for when they returned to 100 percent (photo). This worker cleaned a stretch of Elizabeth Street under the newly tagged wall identifying the force responsible for it all (photo). 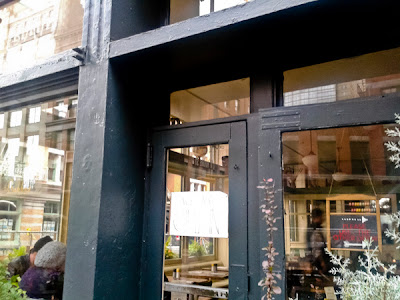 In TriBeCa, residents walked their dogs or just left the house for a walk or to get a meal. Many restaurants were open, including Bubby's, Gigino's and Ivy's Bistro (not pictured). Bubby's was serving hot meals and allowed customers to pay anything they wanted to could afford. Gigino's offered Mahi Mahi salad, chicken salad, shrimp risotto (photo) for takeout that they heated up for guests too. The woodburning oven was still in working order so guests could order pizza as well.


When I made it down to Battery Park and the Financial District, I saw traffic lights on! (photo) Shake Shack and a movie theater were open, a stream of commuters walked by Ground Zero (photo) and Century 21 was full of shoppers. Interspersed amongst the revival, workers pumped water out of basements and the sidewalk was peppered with the question of the day.


The skies were cloudy all day and now the sun was setting so I decided to head back towards the Brooklyn Bridge. Halfway across, I saw that more power had been restored to Lower Manhattan (photo). I got further confirmation from a friend in the LES that power in the neighborhood was restored as well. Once I was on the Brooklyn side of the bridge, I saw my first FEMA trailer. Help is on the way. 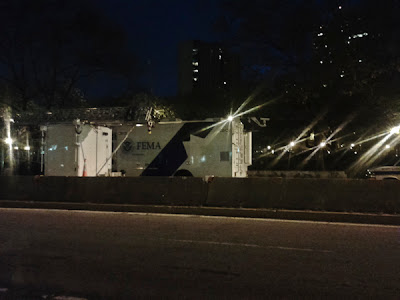