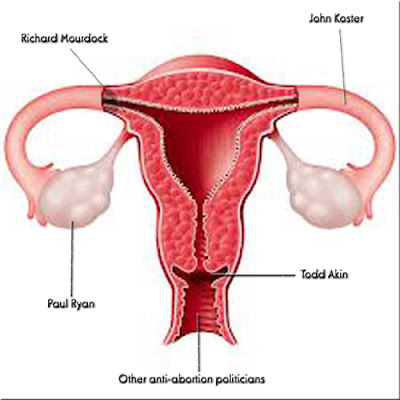 Abortion is a violent act? A woman shouldn't be able to have an abortion after being rape because that would be more violence? Pregnancy as a result of rape is what God intended? Abortion is as immoral as slavery?


If abortions are restricted or made illegal again and we return to the days of knitting needles and hangers, that will be violent. Pro-lifers killing doctors who perform abortions, bombing clinics and terrorizing their patients with Photoshopped images, that's violent.

Women of all races and socioeconomic classes have abortions for many different reasons -- all valid. Yet these men who do not have uteruses, men who have never menstruated, endured PMS, crippling menstrual cramps, men who don't take hormonal birth control or have IUD's implanted, undergo hormone treatments and In vitro fertilization, men who have never been pregnant, miscarried, had an ectopic pregnancy, an abortion, uterine fibroids, hour-to-days long labor, natural birth, Cesareans, breech births, think they can decide what's best for a woman.


Does it take two to make a baby? Sure. Does it take one to incubate and birth it? Yes. And that is who should have final say. Those of us that enter into relationships with men don't do it so they can control us or our bodies. Women are capable of making their own decisions on contraception, abortion or fertilization. We also do not need government legislating what goes on with our reproductive system.