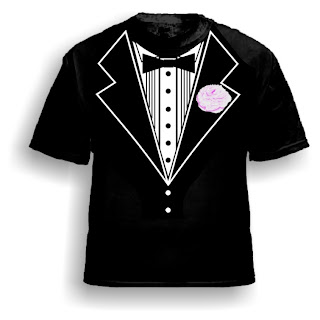 I met a man a week ago for Sunday brunch. We'd confirmed plans the night before. On Sunday morning I received a text from him:

I'm up. Don't know what to wear. Lol. today is beautiful.

Ok I thought, he just wants to strike up conversation. He'd never used "lol" before either so I let that one slide. I wrote back that he should just dress comfortably especially if he was going to be out and about all day. I told him my motto is all about comfort to which he replied:

My comfort is old cutoff jeans and a t shirt. That's not what u meet someone dressed in.

That's when I realized he was (in a way) asking me what he should wear. Or at least giving it some thought. Thank you! We quickly switched to talking on the phone and he told me again that he wanted to look "nice" or "decent". I told him again that you can do that and still be comfortable. I don't remember how it came up, but we talked about possibly dressing how he would for work--perhaps casual Friday. He said he wears a shirt and tie to work. I let him know I wouldn't "match" that attire at all. It was Sunday morning/afternoon. And HOT. I was going with comfort. "Just be yourself," he said.


A few days after brunch, I hung out with another guy. 13 years my brunch date's junior, he showed up wearing a t-shirt, jeans and black sneakers. We were hanging out at night. He knew ahead of time where we were going and it was the first time we were meeting. It wasn't a romantic date. Maybe t-shirt and jeans are just his style. But given that he knew the venue and the nature of the event, I think he could've tried a little harder. It wasn't even a high-quality t-shirt. It was a "this is my favorite t-shirt". It used to be black and the graphic on it used to be more vibrant in it's heyday. He was reminiscent of my Raggedy Andy from a few years ago (can't believe I'm blogging about another raggedy ass).


How much thought and effort do you put into your appearance when you're meeting someone for the first time? I'm not putting on 3-inch heels for anyone. But I know to still make an effort. I dress appropriately for the occasion. Is it a decision of comfort over style? If I did show up on a first meeting (romantic or platonic) dolled up in make-up, heels and a skirt or dress, he may expect that more often than not. If you show up the first time dressed to the nines and then "regress" to your more casual self later on, is that deceitful? Is that first impression a false one?